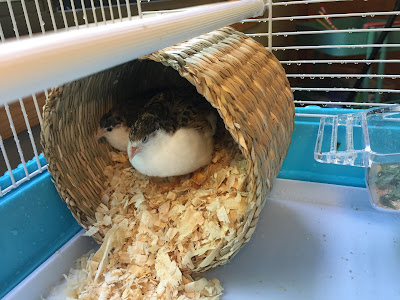 I have a soft spot for birds.

I have loved them hard for a really long time.

I really wanted a parrot or conure, but we couldn't afford one.  We had a baby and were struggling to pay rent for just a one bedroom apartment.

My friend offered to give me some canaries for free. I enjoyed looking at them, because they were pretty. But they were also pretty dull, since I couldn't ever hold them and they had no personality whatsoever.

A few months later, my husband's cousin traded me my quiet (dumb) canaries for her smarter (louder) cockatiel. She was a school teacher and she had gotten complaints about the cockatiel in the classroom/s.

I enjoyed that bird. I fed him from my plate (Don't judge lest ye be judged) and he climbed all over me and even took showers.

But he pooped everywhere. Birds do doo-doo.

And we had a baby who was beginning to crawl, and then toddle, and she was starting to grab at everything, and birds are fragile, and I was still postpartum, so it was just too much.

I gave my cockatiel to a little homeschooled girl who managed to stand up to all my intense grilling about bird care and the ethical and moral duty of owning pets.

That's when I let the bird-loving part of me just go to roost, while I focused on looking after my own brood.

My friend offered me her quail a few days ago. She was moving. They needed a home.

But then we went to visit her to say, "Goodbye" before the move, and the quail were still there, and the kids went over to see the quail, and then they held the quail. And then the quail promptly flew up and out of their hands and ran all over the room.

I saw how fast they run and funny they look while running.

We all worked together and caught one. Finally!

I gently cupped it in my hands and brought it up to eye-level to have a closer look.

That tiny bird focused its eye on me, too.  Little as it was, it seemed to take me in in total.

Then it settled itself into my palm like it was nesting and made the sweetest, humming sound. It's whole body vibrated about one hundred times in that one second.

Then it started slowly batting its beady, little eye at me.

The eye lid seemed to close bottom to top.

And it had the tiniest, little, most perfect eye lashes.