Skip to main content
Posted by Veronica Boulden on May 03, 2012 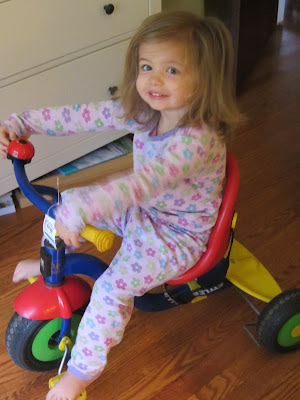 We found this tricycle at the thrift store for $5 last night! I had been praying about and looking for a used tricycle for the past two weeks, ever since I realized that the new bicycle we purchased for Avril for her birthday was a bit too heavy for her legs to push at her size. At first, I thought that if we practiced with her bike enough, she'd get stronger and be able to handle it, but after a while it became clear that her little legs and body need another winter of growth before they could handle a bike that size. I realized I had spent as much money as we had to spend on a bike.. on a bike that was too big and so I was stuck. What could I do?

I was afraid Avril wouldn't have anything to ride on or even have a stroller to ride in (now that her baby sister is here) till she was big enough to handle that bike the next summer.  Would she just have to toddle behind us all summer long while I pushed the baby in the stroller and her big sister Norah rode her bike way ahead?

I had been looking on Craigslist and I saw these Kettler tricycles. I knew that they were going for over $100 used (way too much for us to spend). So when I walked into the thrift store and saw one of them by the entrance last night, I went over to it directly. I checked the tag and I could hardly believe the price.  It was so affordable, it would have been wrong not to buy it! We put Avril on it to see how well she would do pushing it and she rode forward with real ease.  At that, our whole family broke into cheers right in the store. We had all seen just how hard it had been for her to get any forward motion on her bike and we were all sad over her bike-predicament.

I give God the glory for these kinds of coincidences in my life. He's a good father to me and to my children. In perfect time, Avril has a bike just her size and she's ridden it all around our streets with ease twice today already.
Cheap Thrills Spiritual