Posted by Veronica Boulden on November 22, 2016
Take heed. Do not neglect to read those lowly in-text citations. They often appear useless and boring, but they can and do lead from good things to greater things, from mundane things to divine encounters with the living God.

See, I was reading Millstones and Stumbling Blocks by Bradley E. Heath, a scathing critique of modern education that I do not recommend, but that I will probably end up quoting extensively in every day life. (Even I found Heath's "preaching" too hard and I am a member of his proverbial choir. If you think John Taylor Gatto is controversial and/or offensive, well, "You ain't seen nothing yet!")

Anyway, in Millstones and Stumbling Blocks, Heath quoted a guy I had never heard of named James V. Schall, saying that Schall said, "Why read?  Because we are given more than we are."  If I am not mistaken, that's the only Schall quote in that entire book, but that one quote so intrigued me and captured my imagination that I looked it up in the bibliography and found that it came from a book called, Another Sort of Learning. 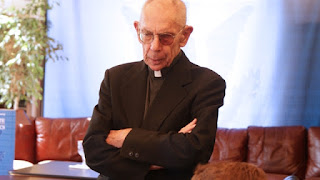 So I looked up that book and the subtitle sounded like just the sort of thing I would like, so I bought it on Amazon Kindle "with one click" and now I'm reading it. I am a little more than halfway done, but I am already certain I will end up quoting this book in everyday life, too. (All my conversation may end up being quotes!) 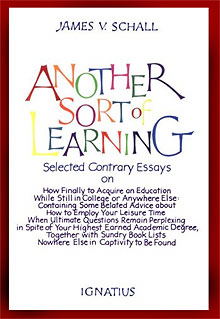 Anyway, then I Googled and read more about the author "James V. Schall" and found watched this video of a lecture he gave at Villanova.


Certainly, Schall isn't easy to watch like Jimmy Fallon is easy to watch, but, nevertheless, Schall's words fell like rain in the dessert to my thirsty soul. I knew right away that I had found a mentor in him.

Lao Tzu said, "When the pupil is ready, the tutor will appear" and this seems to be true. Apparently, I was just ready to find Schall. His rich conversation is answering so many questions I have started to ask recently, particularly those questions I have been asking God during times of meditation and prayer. That's what makes discovering Schall so significant to me.

I am certain God lead me to him. Now I affectionately call Schall "my dark oculator,"  since his glasses and suit make him look exactly like a villain in Brandon Sanderson's Alcatraz Versus the Evil Librarians, a book series we are reading with our kids. Also, the geek in me adores the fact that Schall ends this lecture and every single chapter of his book, A Different Sort of Learning, with a list of more books and/or essays to read on a given topic. So now I've got my work cut out for me, but that's also just the sort of thing that I like.

And of all places, I discovered Schall in an in-text citation! "One good book leads to another," it is said. Like a trail of breadcrumbs, I am following this trail of ideas and it is exciting! I give God the glory. He is so faithful to answer the deepest questions in my soul. After all, it is His deeper and ongoing conversation behind Schall's words that I delight in, truly.

God counsels me in the simplest of ways, using a quote from a Godly scholar, that leads me to a book filled with wisdom, that leads me on to a another essay... But it is His voice I hear and His voice I follow on. "Deep calls to deep."  Psalm 42:7 I will delight in this trail of ideas He, the bread of life, lays down for me.