Walking On Water by L'Engle 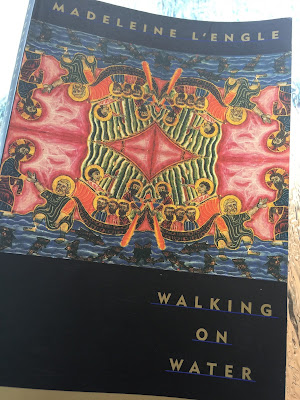 First, it was Ruth Bell Graham's Footprints of a Pilgrim.  I knew right away, within moments, that the book was divinely put into my hands. To know that such a woman even existed and cared about the things I care about: God, marriage, family, home, it gave me so much strength when I was in my twenties, and I needed to know that it was alright to be pursuing a degree, yet care more for the simple things.

Next, it was Saint Theresa of Avila's Interior Castles. That book came at a time in my life in my thirties, when I was experiencing God in new ways. Even if she who wrote it happened to be a nun who lived on the other side of the world centuries removed, it strengthened me to know someone like I lived, and experienced God in strange ways, too.

And now, it's Walking on Water by Madeline L'Engle.  The book comes as I near forty.  This woman's internal and external life is eerily similar to mine now. I was beginning to doubt whether it was normal to contemplate the greater things, to play piano, to translate languages, for God to be so real to me, for me to want to make stories that bring people light, and do all these in the presence of children. It's probably not normal, but I feel strengthened to know that someone else lived as I live and thought as I think.  It's like time wrinkled and I got to spend a few days in conversation with her.

God's sends me mentors, friends, at the time I need them, and He is not bound by time in doing so.