Posted by Veronica Boulden on December 27, 2017 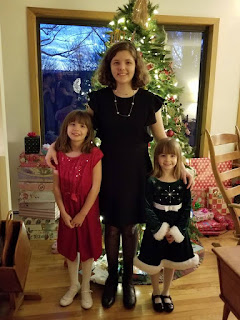 Having three girls means we can reuse clothes, which is nice, because it means we can save some money. Any clothes that aren't currently being worn are washed, dried, and put up in big Tupperwares according to their size and/or the season.  I save all our Christmas attire in a separate box altogether, since it is usually fancier and the fabrics that make these dresses and sweaters will not sit nicely in a box with a bunch of jeans, etc.

Naturally, I usually have to buy a dress for the oldest, biggest daughter, unless she doesn't grow too much in one year. And a few times I have had to buy a dress for a littler daughter, because she grew enough to make last year's dress too small, but she did not grow enough to actually fit into the next size up in our collection.

After thirteen years of doing Christmas with daughters, though, I usually have a dress for my little ones and it's only been worn once or twice.  So it's a very exciting day in December when I pull the Christmas box down and we try on the dresses and assess what we need, if anything.  Avril, my middle daughter, is already eyeing the black lace/ white tulle dress that her older sister wore many years ago that she would like to big enough for next year.