Skip to main content
Posted by Veronica Boulden on November 15, 2008 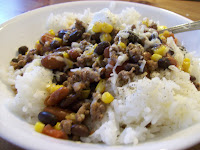 Ingredients:
2 Cans Corn- water and all
2 Cans Black Beans- rinsed and drained
2 Cans Kidney Beans- rinsed and drained
2 Cans Diced Tomatoes- juice and all
2 Cans Chicken Broth
1 Pound Ground Turkey or Beef
1 Package Taco Seasoning
1 Package Ranch Dressing Mix
*I usually have to purchase a few packs of ranch dressing mix at a time, since I have only ever found it available in a box of a few packs, not in single packs like the taco seasoning.

Pour corn, drained and rinsed beans, tomatoes and broth into a large pot.
Begin heating it up on low, stirring periodically.
Sprinkle in taco seasoning and ranch dressing mix. Taste the soup's broth and add more or less of the seasonings to suit yourself and your family.
In a separate skillet, brown a package of turkey or beef seasoned again with some of the same taco seasoning package from above.
Drain the meat and pour it into the soup.
Let everything simmer on low for about 30 minutes.

*We had this for dinner tonight. Sometimes, I will cut the recipe in half to avoid having so much left over. But, even though our family is small, I usually just cook the recipe as it says above and we'll just eat the leftovers for lunch the following days. Originally, I got this recipe from a very good friend who served it to us for dinner over rice with shredded cheese and sour cream. But, it also goes well enough with saltines or warm cornbread muffins and butter.
Recipes