Skip to main content
Posted by Veronica Boulden on May 14, 2009
He's somewhat of a celebrity in Waterbury, Connecticut, where I live. But, when Dwayne and I first moved here, we didn't know what to make of him. We referred to him as "that crazy guy who always waves the flags." But, since then, we've gathered information about him here and there and we know that his name is Ziggy, he was born in another country, he moved here from there and he absolutely loves all things American.

We thought his extreme patriotism was a kind of phase he'd grow out of, but after years of seeing him march in our parades and stand on street corners, we've really grown to love him and we're always glad to see him. So, now we honk and smile and wave when we see him around and I'll always point him out to Norah.

I found myself behind him at a stop sign a few days ago. I had my camera handy, so I snapped a picture. If things go as they did in years past, I bet I'll see him twenty more times before the weather turns. So, for the fun of it, I think I am going to make it my ambition to catch this local hero on camera as often as I can.

We see him all the time, but the question is, will we have our camera handy? 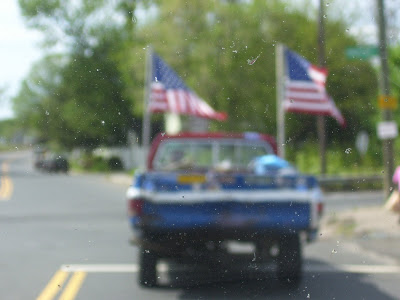 But, my windshield was so dirty, the camera thought I was taking a photo of it.
Humor

Jules said…
I love this! I'm always so glad to see people being patriotic.

Anonymous said…
That's great! I once saw a man who covered his vehicle in scripture verses and he drove around town when we lived in FL. He always had the visors down so no one could see who he was. It was neat though. You should call this blog about Ziggy, "Ziggy Sightings." lol. Bonnie
June 27, 2009 at 9:51 AM