Skip to main content
Posted by Veronica Boulden on May 13, 2009 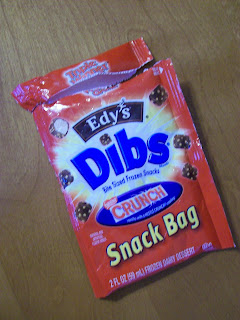 I am, therefore I get.

Norah got this bag of Dibs from the cashier at the grocery store the other day. I let her eat them on the way home and after tasting one, I made her give me quite a few more pieces. Neither of us had ever had these before and they were so good.

This kind of thing seems to happen to Norah all the time. People just give her things, nice things. Her dad and I joke that she must have some sort of invisible mark on her forehead, like Cain, but this mark doesn't send people running, it provokes them to shower her with gifts.

Once, Norah complimented a lady's necklace, then we left the store. The lady must have been overcome by something, because she ran after us to our Jeep, practically ripped off her necklace and begged us to take it for Norah's sake.

Norah thinks I buy her the kids meals at Wendy's, but I never do. I never have. Nine out of ten times, the cashier just gives her the toy.

An old man, a perfect stranger, must have spent at least ten dollars to get her stuffed animals from a toy machine at Duchess. I saw him getting change for the machine, but figured he had a grandchild or two at home. When he finally grabbed the puppies with the claw and got them out, he turned around and brought them to Norah. I was shocked.

Without fail, our lovely neighbor brings Norah a treat every time she sees her in the yard.

Norah gets suckers at the bank, balloons at the mall, a pretzel stick and her choice of a sticker at the pediatrician...

She never asks for anything, but I am beginning to think she is starting to expect things. And, I wonder. Do other parents notice this type of thing happening with their children, too?

Our pastor once dumped a twenty pound bag of sand onto the stage at church to illustrate how much of the world's resources are concentrated here in the United States. He sprinkled handfuls all over the place to represent the resources used up in Africa, Asia... but he poured most of the bag into a huge pile to represent how much North America uses compared to the rest of the world. Then he mentioned how many people were living and somehow, still thriving, under the sprinkles of sand and how few, comparatively, were living under the pile of dirt and still wanting more and more... It made me sick.

We do have so much and we are often still so discontent and greedy for so much more, so much better, so much bigger.

The first thing I want to do when people want to give Norah something is beg, "Please. No!" and try to explain to them that she has enough, more than enough. Sometimes I want to insist that they don't give her anything. But, to be polite, I am usually forced to assent and say "Thank you" and make Norah do the same and let her have the treat or toy. I am thankful for what we are given, or at least, I think I am thankful. But, I fear for my daughter and for myself, too.

Are we learning, however unintentionally, that we are somehow entitled to a certain amount just by being here? Like having enough, or rather, more than enough, is just some fact of life?

gina said…
I think it presents teachable moments. How nice it feels when someone does something nice for someone- and those who can should then do for others. I think kids are never too young to learn accountability to the community around them . :) We give bags of food to the food bank, books to the library , etc. on a regular basis for those who don't have what we are blessed to have, but I also love when the girls act on an individual basis.
May 13, 2009 at 7:52 PM

Veronica Boulden said…
Gina,
I haven't included Norah in our giving. I should, though. That should have been obvious. This Saturday is when our mail man will pick up food from the door step... Maybe she can help me pick out food to donate. Your are right, though. And, maybe some giving would counteract all of this get, get, getting.
May 13, 2009 at 10:38 PM