How A Simple Writing Assignment Quickly Becomes So Much More 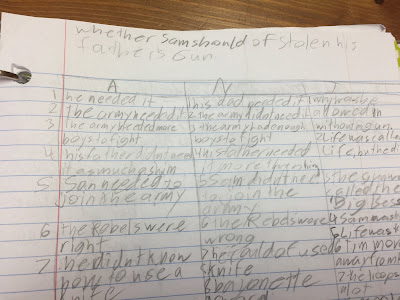 I had my oldest read the book My Brother Sam is Dead with me.  It's a historical novel set in Redding, our new community. All the sites are within walking distance of our new house, and apparently, while the characters are fictitious, the events in the book are based on original sources the author could find and as accurate as can be.

The title of the book might give you some idea of what may happen in the story, but if you want to read the book My Brother Sam is Dead, don't read below, because there will be spoilers.

I asked my daughter to choose between two issues: "Whether Sam should have stolen his father's gun" or "Whether Putnam should have had Sam executed." I usually let her create her own issue, but I was really interested in these issues, so I guided the conversation in that direction, because I can do that as teacher/parent and my daughter didn't have a strong opinion to the contrary.  She just wanted to get it done and get back to all the extra library books she gets to enjoy over Christmas break.

She chose the former issue and I asked her to make an ANI chart that had at least twenty items in each category: affirmative, negative, and interesting.  She managed to get ten to twelve items in the first two columns on her own then she came into the kitchen and started complaining that it was too hard. At that point, I made some coffee and we started our discussion while I made dinner. By the time we were done talking about the book, she had filled in the chart.

During our discussions like this one, I realize how quickly teaching turns into parenting and how quickly parenting becomes discipleship.  I saw that this was true before I started homeschooling, and it's why I wanted to homeschool, but moments like this help flesh out that reality for me.

When we began our conversation, my daughter was sympathetic to Sam and she was certain that he was right to take the family's gun.  But by the time we went through this thought exercise together, she was much more critical of Sam. She saw how he was a bit selfish, really naive, zealous for good, but also reckless, adjectives that can describe many a young person with noble ideas.

As we talked, we touched on the other issues in the book, too, and she saw how the story shows that Sam was not entirely guiltless of the crime he was executed for.  And the questions came up: What is guilt? What is innocence?  Are any of us really ever innocent and totally undeserving of any suffering?  We begin to realize how relevant science and faith can be to what is actually happening in our lives.

She also recognized the hard truth of how Sam left his family unarmed, and unfortunately, that ultimately, contributed to his father's being vulnerable enough to be taken by a group of lawless men and dead on a prison ship. So critical topics like right, wrong, war, peace, law, justice, guilt, innocence, conscience, morality, loyalty, duty: all of these came up as we thought through this issue, and they always do come up, even when the simplest of issues are really thought through.

All I can hope is that this sort of thinking and learning will help my daughter make better decisions as she grows up.  That's the best I can do for my daughter as a parent.  Of course, my practical goal was simply to make her review what she is learning in her writing program, because I am her teacher and I need to do that.  But, of course, she and I were obviously doing so much more than a writing assignment. But aren't we always doing more than that? Was I teaching her writing or was I showing her how to really think and helping her discover what is true?
Homeschool