A Gentle Word on Goal-Setting 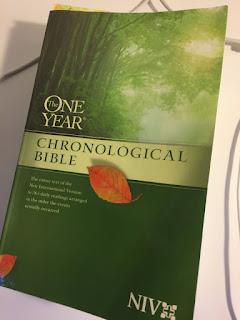 I made it a goal to read The One Year Chronological Bible in 2017.  I tried this last year, but I failed to stay with it.

The Bible in this format as compared to the other One Year Bible is more difficult without a doubt; No inspirational Psalms;  No convicting Proverbs.

But that's not really why I didn't accomplish this last year.

I just I hated being so far behind, so then I just gave up trying to catch up.

But I wanted to try again this year. I felt like there was something there, something important in that failure that I needed to confront, something that God wanted to show me.

So I started again on January 1, 2017 and did well for like three days.

Then I got behind almost immediately, not able to read the Bible every single consecutive morning, because... life.

But this morning, I had a little more time than usual, so I caught up.

Now I am set to read January 15 tomorrow and all is right with the world.

When I closed the Bible this morning after catching up, I had a moment of realization about goal-setting.

Why didn't I just keep reading last year and finish The One Year Chronological Bible later?

If I had just kept reading, I might have finished today, for all I know.

Even if I finished in February or March of 2017, would it have really mattered in the end?

No.  I didn't finish, because I didn't like feeling imperfect, so I quit trying.

The revelation came so quickly and gently, I almost missed it.

It's not about perfection.

It's not about saying, "I read The Chronological Bible every single morning in 2017."

It's about having a better understanding of how God worked in history.

It's about taking a big, worthy goal and making it attainable by following a plan and doing the best you can everyday.

So set some goals, people!

You will probably fail and find that you are imperfect almost as soon as you start trying.

But if you keep on trying, you will look back and see that you "caught up" to your goal after all.