Skip to main content
Posted by Veronica Boulden on September 28, 2010 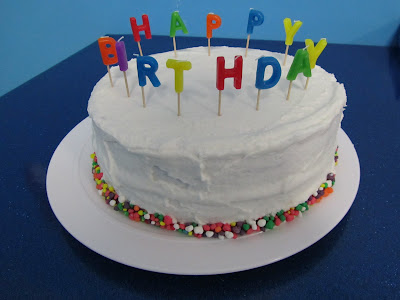 A very good friend of mine said she considered me frugal and admitted that she was "shocked" when she saw that we decided to have Norah's birthday party at The Jump Zone this year. She has heard how expensive these parties can be. The basic package usually starts at $250 but when you add beverages and food and decorations and favors for the guests, you can easily double that price and spend $500 on your kid's party. I wanted to say a few words about this by way explanation and in defense of our choice. What I say might surprise you.

Norah turned six this birthday, so to date, she has had three birthday parties that included guests...

The first party we had at our home, assuming we'd save money that way. We worked for days to make the house clean enough for husband and wives and kids to come over. It was very stressful. We decorated the kitchen with streamers, a table cloth, matching plates and napkins and a few balloons. We provided dinner (hamburgers and hot dogs on the grill plus sides like chips and dips) for three of Norah's friends, their parents and siblings. We purchased a simple cake from a local bakery and had ice cream with it and we gave the kids goodie bags. We were exhausted and after everyone left, the house was trashed. The cost of that party was $310.

The next year, I was determined to save some money, if at all possible. So, I started pricing everything weeks in advance. I compared different stores' prices and found coupons for things that I could. We had the party at our neighborhood park. We decorated the gazebo with balloons I had a coupon for, but skipped on the matching table cloths and plates and napkins, using what we already had at home, not caring whether or not everything matched. We invited half a dozen kids and their families. We provided them with pizza and their choice of water, soda or juice boxes from a cooler. I made the cake. The cake was huge and the pans and supplies I needed to pull it off added to the cost of the party, even with discounts, but Norah needed a cake anyway, I reasoned, and she had been asking for a cake with three tiers for months and months... We also gave the kids goodie bags. I ended up spending more than I did the year before, but I also saved more than I would have if I had not been trying so hard to cut corners, shop for best prices and use coupons. Still, the cost of that party was $350.

This year, we considered the fact that Norah had a lot more friends, four times as many as last year. And, all these friends have siblings that aren't Norah's age but who are still her friends, so they needed to be invited, too, naturally. And all their parents are our friends. We wanted to do something nice for them. I knew we'd easily need to be able to host forty people or more. I knew the past two parties ran over three hundred dollars, so with that in mind, I looked around at party places, doubtful that I would be able to afford something like that for that price.

The Jump Zone would allow us to invite twenty kids as guests (siblings under two and parents were allowed in for free). They would provide all set up and clean up. They would provide table cloths, plates, paper products, etc. The only thing we had to bring was the cake (which I could make at cost since I had paid for the pans and supplies last year.) We had to show up five minutes before the party started and we could leave as soon as it was over. The Jump Zone even helped us wheel the presents our to the car! We had the party after lunch but before dinner, so we wouldn't need to provide food. The price of this year's party was $250.

Now, it could easily have been much more expensive than it was. The Jump Zone had a strict policy about outside food and beverages. We couldn't bring anything of our own (besides the cake). If we wanted to give the kids goodie bags, for example, we had to buy their goodie bags at $6.50 per kid. If we wanted to provide basic food and drinks for guests, including water, we had to pay a premium for those items. One plate of fruit that would feed only 10 people (out of our forty possible guests): $30. One veggie try for ten people: $20. One miniature bottle of water: $1.50... and the list went on and up from there if we were to add pizzas and sodas and decorations, etc.

And, as the date of the party grew closer, I considered doing this, even though the prices were outrageous. I was starting to second guess my decision to skip refreshments and felt really uncomfortable having nothing to offer people.I think this must be what The Jump Zone counts on to really make money on parties. I kept thinking how terrible it to would be not to even have a carrot and some ranch dip to offer people... But, I forced myself not to spend anything more.

I figured the guests would be too busy playing with their kids or supervising them in the area (where food and drinks weren't allowed anyway) to eat anything. I realized our guests would be thirsty, but I solved that problem by sneaking away and spending ten minutes of the party filling the free paper cups they gave us with the free water that came from the water fountain by the bathroom. As the guests came back to the room, they could grab a cup of water. And, I think that water ended up being better than the bottled water in the long run, anyway, since it was really cold.

The guests only came back to our party room at the end in order to sing and cut the cake and at that point, I had cake to give them, naturally, since I had just cut into it. Now that the party is over, I am pretty convinced any food we would have had would have been almost entirely wasted.

So, this birthday party was not only the easiest, the largest, the funnest party we've ever been able to host for guests and us alike... it was also the cheapest, by at least sixty dollars. Lord willing, we will do this kind of thing again next year.

And, when Avril is old enough to "need" a party, too... I imagine we will just pick a day of the year that works for everyone and have our two girls split the guest list in half and let them invite ten kids a piece. We'll just have to find a way to do two parties without doubling our "party budget."

Jeff & Michelle said…
Very sensible and exactly the reason that when Paul wanted a bowling party with three of his close friends this year, I jumped at the idea! A cake, a few favors, and an hour and a half at the bowling alley and we were done. A party at home can get MUCH more expensive and time consuming! Clark had a pirate party when he turned 5 for just a few friends and I shudder to think of the time and expense. (Sorry to be a blog stalker, but I so enjoy your blog! :))
September 28, 2010 at 8:28 PM