Skip to main content
Posted by Veronica Boulden on January 24, 2011 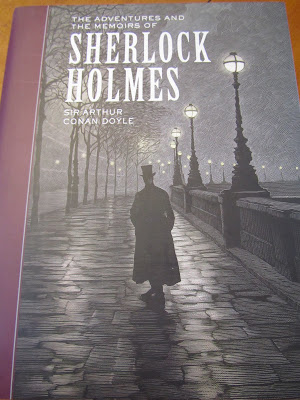 I've started on my second book this year The Adventures and Memoirs of Sherlock Holmes by Sir Arthur Conan Doyle. I'm about a quarter of the way through it and one of the stories was very familiar to me, actually. I was really surprised and confused by this and after a lot of thought, I figured out that I must have been in a strange mood the day I was assigned that story in high school English class, because I did the strangest thing, I read it!

There were times when I can remember being determined to learn in spite of the fact that I was in school and that day must have been one of them. Most of the time, I could make good grades just by listening to what the teacher's said I needed to know for the test. It's only now that I'm well out of school that I understand the value of learning for learning's sake... But, I digress. Back to Holmes.

He is clever. I can see why he was such a celebrated character when he was new to everyone. However, it's hard to believe he was ever original, since by now, Holmes has been repeated so much on modern television and movies that he is very familiar to most of us, even if we didn't read any of the stories in high school English. For example, I used to think House: a genius, obsessive, unsocial, drug addict, with only one true friend who he holds anything that resembles affection for, was a pretty original character, but now I see that House is just Holmes in a hospital setting.

The book's good and like the television shows that have Holmes-like characters, it's addictive. I can't wait to put the kids to bed, read the next chapter and see how he manages to solve the next mystery.