Skip to main content
Posted by Veronica Boulden on October 24, 2011
"The big problem with writing is while the child is developing the skill he's got to simultaneously fill that skill with content. It's a little bit as though the kid were learning how to play the piano and the only way he could learn to play the piano is to compose his own music at the same time." 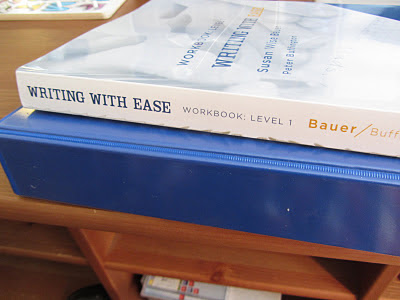 I like Norah's writing curriculum because it makes sense to me and it is the answer to all the nagging doubts I've had when looking into other writing programs for young ones through the years.

It doesn't require Norah to write paragraphs and more paragraphs before she has anything real to say. In my opinion, it makes no sense to expect a seven year old to come up with at a moment's notice several facts on African wildlife or time travel or her last trip to the zoo or whatever.

And the program doesn't ask her to make up stories out of thin air, either. I've never thought it made sense to expect a kid to write from "Once upon a time" to "...happily ever after" before she could even spell those the words correctly. Some people write creatively naturally. I write daily, but I am not one of them.

What Norah's writing curriculum does do is model excellent language to her until she is old and wise enough put it use for herself in whatever way she'll need or want to.

She is learning basics like sentences start with capital letters and end with periods and critical things of that sort while she is young enough to absorb them with ease.

She hears and then narrates or copies from some of the best passages in childrens' literature.

So, when the time comes, when she's ready to say her own things (and write them down), she'll model, without even thinking, all the good language she's heard and seen along the way. 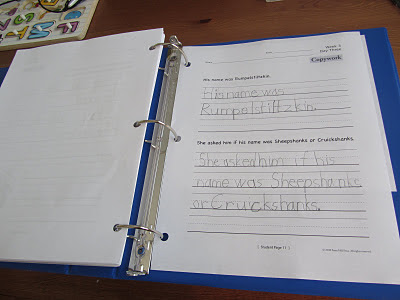 Dawn said…
I just switched to WWE for my 9 year old. He's a little older but I think it will offer such a good foundation that it's worth taking him back a bit to complete it.

I tortured my poor daughter with creative writing programs and although she's a VERY creative writer and does a lot of writing in her spare time she still hated those. I'm trying her on SWB's WWS now and she's loving it.
October 24, 2011 at 1:27 PM