Skip to main content
Posted by Veronica Boulden on November 10, 2019 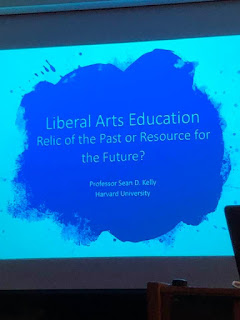 Dwayne and I attended an event at our local library this week.  Professor Sean Kelly from Harvard University spoke about the benefits of a Liberal Arts Education.  He said many worthwhile things that evening, but he told a specific story that I'd like to try to record here so that I won't forget it.  The story speaks of the importance of memorizing worthy words to enrich our lives.

He said his wife's grandmother grew up in China where one does not choose their profession and one is educated for the profession he or she has inherited or been assigned.  The grandmother came from a family with generations of scholars, so she was educated for that purpose.  The boy scholars went off to school, but the girls were educated at home by their mothers. The grandmother, now eighty years old, remembered that when she was a girl as young as ten, her mother would assign something like one hundred lines of an ancient Chinese poet or philosopher, something from the corpus of their culture, and send her away to memorize it by the next day when she would come back and have to recite it.  If she didn't recite it well enough, she'd have to go away to study it more and try again later until she had it memorized.

The grandmother admitted to Professor Kelly that she did not enjoy this part of her education. But she learned vast amounts of ancient poetry and philosophy. The grandmother said her mother had tried to explain the value of what she was doing to her, "These lines of poetry mean nothing to you now. But someday in the future, an event will happen, and these lines of poetry will come into your mind unbidden, almost as if by magic. The event will inform the poetry and the poetry will inform the event."

Professor Sean Kelly said he was moved to tears by this statement. And I was moved by this part of the story, too, since I believe and have experienced the soul-deep benefit of memorizing worthy words, and I make my daughter's learn poetry and Psalms, too, so as to furnish their souls for the future, though I don't assign nearly so much as the grandmother had to learn.  So Professor Kelly was curious and he asked the grandmother, "Did it happen like that?" The grandmother promptly said, "No." To this, we all laughed.  But then he said she thought a moment and quietly added, "There are lines that still haven't come into my mind yet."

So, what we all understood, was that it did happen like that and apparently, it happened often enough. She had lived long and the words she had stored had come to her when she lived them, but not all the words had come yet.  After eighty years, she still had words in her mind for events she had not yet experienced.  This gave, this gives me goosebumps.
Homeschool