Posted by Veronica Boulden on February 05, 2022
We're still preparing for the upcoming Science Fair over here. It will be held on Tuesday.
My daughter's board has been finished (basically) for weeks, and she has been practicing presenting with it all that time.
But the various items on her board were just taped there until yesterday. That way, she could make adjustments big and small as needed and so she could try different arrangements.
Note: This is not my first rodeo. There was intense drama and tears when stuff got glued to boards too quickly to project boards in the past, so I insisted she tape everything first. She complained about this and even cried because she realized how much work it would mean would have to be repeated, but in the end, she was also glad she taped first. She did end up wanting and even needing to make at least a dozen changes to the board as she went on through the last few weeks. So having things taped made that possible and easy.
But yesterday, we finally spent a few hours actually gluing everything to her board, since it was all certainly where she wanted it once and for all. I helped her with that part of the project. It was labor intensive and she needed the emotional support more than anything. We got a more than a little worn out and stiff sitting there and leaning over and we even got woozy breathing in the fumes from the rubber cement, but conversations were had and memories were made. 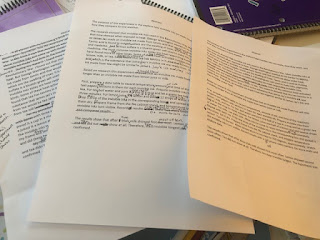 She also wrote an entire abstract yesterday start to finish.

She was able to do that totally on her own and quite easily at this point, since she's had her research paper/ lab report done for weeks and she been practicing her presentation for weeks, too.

For the abstract, I had her focus on the purpose through the conclusion parts of the project, leaving off the research ideas and questions, and keeping everything as brief as possible.

Note: An abstract is an optional part of the project as far as I am concerned, but she wanted to do it, probably because her director really encourages it, so I let her do it.

We also made the absolute final edits to her lab report yesterday, too. That had been written for weeks and edited here and there and quite extensively at this point, so we didn't have as many changes to make on that. 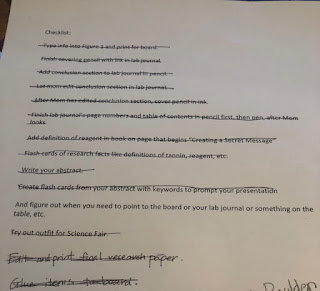 We made this checklist a few weeks ago that included every single little item left "to-do" right down to choosing the right outfit to wear to the fair.  Any little or big thing about the project that was stressing her out, we put on this list, so she could see the items being handled one by one (and so it wasn't left up to me to remember every little thing).
As you can see, there is only item not crossed totally off the list. That is "figure out what hand gestures" as she goes through the material. Like I said, she's been practicing the presentation for weeks, but she says she is still not entirely certain where to point or when exactly to pick a prop up, etc., so that's still on the list. She'll get to practice presenting a few more times before Tuesday, so I'm sure she'll figure out the hand gestures by then. 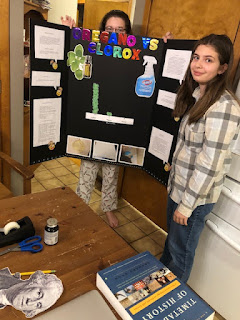 At the end of the evening, we pulled her big sister's old Science Fair project board out of the closet and we all laughed and reminisced about her time doing Science Fair. My oldest admitted she did not enjoy the process and was difficult to lead. She only did what I insisted she do and not a single thing more, etc. But she was still proud enough of her work and her board.
Naturally, my middle daughter was comparing her current project to her sister's old project. As we worked, later, in private, she whispered, "I think my project is better." She seemed to need to process that out loud and get the guilty truth off her chest. I chuckled. I wasn't shocked by the comment at all, probably because this isn't the first time I've had a twelve year old girl.
"It probably is better," I admitted in a quiet voice. She seemed shocked for a second and laughed nervously. Then I told her, "Remember to be humble." "I know," she said. I told her, "I'd say as much in front of your sister. You've worked hard and you've done every single thing I've asked and more without pushing back, so of course, that has made a difference. But you also had a better teacher than your sister ever did." Then I smirked.
She looked at me with a question in her eyes for a moment then she seemed to understand what I meant. I wasn't talking about her current director or her sister's past director... I was talking about myself.
I still went on to explain to her quietly, "I have had a few more years of experience than I had when I was walking your sister through that project. That also makes a difference." She nodded and smiled and bowed her head and we kept on working.
How rewarding to lead these souls through life and teach them how to navigate these things.
Challenge A