Posted by Veronica Boulden on September 07, 2022 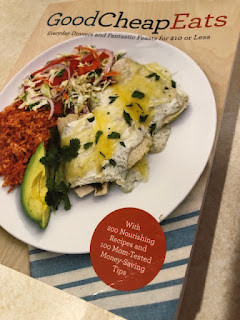 There's a meme that says, "No one has more false hope than a homeschool mom with a new chore chart."

The same could probably be said about a young wife with a new cookbook.

But in this case, I'm not a young wife.

And in this case, I've already made four of the recipes in this cookbook that I recently bought on impulse at the book fair.

Four recipes is four more recipes than I made in the last four cookbooks I bought before I realized I don't actually ever cook anything in the cookbooks that I buy.

And I've been cooking and buying cookbooks that I don't use long enough to know when a cookbook isn't going to work for me.

I only need to read it for about one minute.

And most cookbooks don't work for me, so I usually don't even buy them anymore.

But after scanning this one for a minute, I knew I had found a unicorn.

So I keep reading, and I kept finding more and more recipes I knew I'd like.

This cookbook uses ingredients I usually have or buy and I've actually heard of them all.

It is nearly perfectly aligned with my sensibilities, skills, and actual interest-level than any other cookbook I've found so far.

I've marked the recipes I've made, and I plan to make many more, if not most in this book.

My family wants me to make those recipes I've made again already; They were so good.