Skip to main content
Posted by Veronica Boulden on May 08, 2010 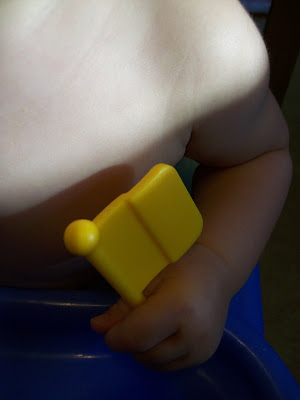 I once read about a little boy who wanted to sleep with his chair. No, I didn't type that wrong. I didn't mean bear. I meant chair. He had an office chair at his writing desk that he insisted on sleeping with. He really liked his chair. His parents were worried, to say the least, they thought this must not be normal. Who sleeps with office furniture?

They offered him stuffed animals and blankets, even baseball bats and gloves. He didn't want those. The little boy really liked his chair and really struggled to fall asleep when it wasn't in the bed with him, so the parents gave in and out of compassion, let him have his way. But, the boy grew up to be normal and didn't bring his desk chair to bed with him after a few years and when he went off to college and later got married, he kept the furniture where it "belonged."

What's my point? You can't control what your kids become attached to and I'm not sure you should try. Avril has a thing for the flag in the photo above. It's a little weird, but also kind of cute... for now. Sometimes what your kids want or like is silly or stupid or insignificant or even gross to you.

My oldest daughter asks for mustard on her sandwiches and when I give it to her, she always proceeds to ask for even more because I didn't give her enough. The sandwich oozes mustard by the time she's satisfied. I warn her that she has to eat it, assuming she will decide it tastes as bad as I think it does, but then she says, "Okay!" and goes and eats every bit of it happily, licking her fingers the whole time, to my amazement. She also hates ketchup. She wants yellow mustard in a little cup with her french fries. Her love of mustard confounds me, but I ask myself, "Is what she wants morally wrong? Is mustard... evil?" And, since it isn't, I see no reason why I should exert control over her or why I shouldn't respect her by respecting her wishes.

And, I do this not because I don't understand my authority over my children, but because I do and frankly, I don't want to exasperate my children with my authority. I will use it when it counts. One day, I want my kids to be able to tell the difference between right and wrong, but I do that by keeping the lines between preference and principle as sharp as possible in the meantime.
Family