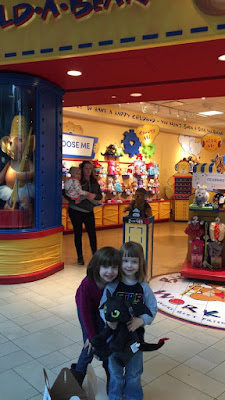 Her dad and I knew that we wanted to take her to Build-a-Bear. (We did that for her sister Avril on her forth or fifth birthday and, at that age, it's just the right thing to do for a little girl.)  Build-a-Bear is not the sort of thing we just go and do when we are at the mall and we hardly ever even go to the mall to begin with. So we knew that for Adele, it would be the greatest thing ever.

We also decided to go out to lunch to The Cheesecake Factory, since it is right there at that mall. We asked Adele and she said she wanted cheesecake instead of cupcakes for her birthday dessert. There's no way we'd do both, not now that we look at food so differently.  If she had wanted cupcakes, we would have had to leave The Cheesecake Factory without actually eating cheesecake, and I am just glad we didn't have to face that reality.

We hardly ever go out to a restaurant like The Cheesecake Factory with the kids, the kind where you sit, order from a waiter, and then have to wait for him to bring drinks and different courses and all that. So it was a very novel experience for our kids. They hadn't had much practice, so they got bored and anxious while waiting, but they weren't too disruptive.

When it was time for dessert, they brought Adele her cheesecake with a candle in it and we all sang her "Happy Birthday."  She chose an original with strawberries on top from the case.  We all had a different cheesecake and shared bites. They slices are so big that we brought a ton of cheesecake home and the girls ate on the massive slices for the next two days after lunches and dinners. I think my slice might still be in the fridge. If it is, I'll surprise the girls with it after lunch.

Later that day, we took Adele to Build-a-Bear. She isn't really familiar with any mall or the stores in them, so it was a total surprise to her. We walked her almost to the entrance of the store, then asked her to close her eyes, and then we lead her to the entrance and had her open her eyes right in front of the store.

Her sisters are older and they had figured it all out at that point, but they managed to keep it a secret, thankfully. So it was a really magical moment for Adele. Somehow, she knew just what to do. She ran right in with her sisters and right to the wall of stuffed animals and chose a Toothless dragon from the movie How to Train Your Dragon.  We love those movies, especially the first one.

The stuffed animal was to be her birthday gift and she knew this without our explaining it and she was thrilled.  Again, we don't do this sort of thing as often as we go to the mall, and that is hardly ever, so this was a huge treat and she really appreciated it. Sadly, while filling the stuffed animal with stuffing, the lady asked Adele, "So are you doing anything special on your birthday?"  Adele just stood there confused for a moment, then said, "I don't know." and giggled. (Her dad and I were a little offended by this, but most of all, we are disturbed. How rich and entitled are we as a society that this sort of thing is so commonplace that it's considered too mundane for a birthday??! But off my soapbox...) We also got Toothless a cute leather saddle. And, of course, Toothless came with a birth certificate and a box that Adele has been coloring with markers since we got a home.

Avril still has and cherishes the Rainbow Dash that she got for her birthday a few years ago. The girls found Rainbow Dash's cape and put it on Toothless and now it's his, I guess. He sits with his saddle and cape atop the pile of stuffed animals in their room by day, and at night, he rests under Adele's sweet, little arm.

We are blessed indeed.