A Note About Handwriting 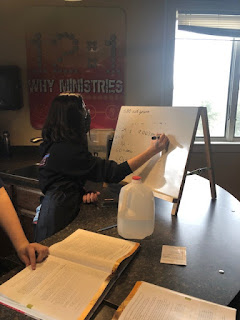 I have been surprised to find that my oldest daughter and her classmates have so many occasions to use manuscript and cursive handwriting skills every single day of their upper high school years.

to leading class discussions on the whiteboard

to creating visuals for class presentations

to taking notes in class that need to be legible later on,

my oldest and her classmates have to use their handwriting skills all the time.

I find that if a student has neat enough handwriting, handwriting is almost entirely forgotten, basically a non-issue.

But if he or she does not have neat enough handwriting, then that becomes an issue all the time.

Imagine a teacher reading a lab notebook and needing to assess the student's work to assign a grade...

Imagine a student speaking from handwritten notecards to make a presentation in history class...

Often, an assignment's success or failure greatly depends upon how well it can simply be read, either by the teacher/ parent or the participant herself.

So I find that handwriting becomes essential to success after all.

At the very same time that I find my students have to handwrite more often, they also have to type on the computer more every single day. So I am not negating the necessity of typing skills. Many of their essays and lab reports need to be typed and they need to be produced quickly, too, since their workload is increasing at this age.

So I am not discounting a student's need to type, I am merely saying that in my experience, handwriting doesn't become less important after all, which is what I expected and what I was told to expect. I have actually found that handwriting becomes as important as typing in the upper high school years.

And when I consider this, it makes sense, after all, since upper high school students are entering the poetic stage of learning. They are not only capable of creating for themselves more often; more often they are called upon to express themselves creatively and they actually desire to do so.

Years ago, when my oldest left elementary levels and went into the middle school levels of learning, handwriting began to seem redundant, unnecessary, and even excessive, especially given all the other more challenging work she had to begin at that point like Latin, logic, rhetoric, etc.

But now, seeing how handwriting has become so very important again a little later on in her schooling journey, I may encourage my younger daughters to do a little more handwriting through their middle school years in order to stay in practice.

Maybe they can keep a simple commonplace book of quotes from the novels they read. I see now that the time comes when they will need their handwriting skills and indeed, so much more will depend on the simple neatness of their handwriting in upper high school.