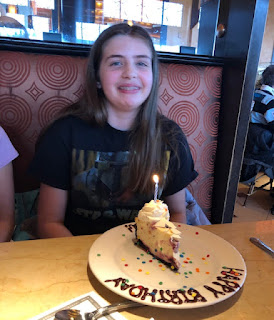 We celebrated Avril's birthday at Cheesecake Factory last night. That's where she and her older sister really like to go for their birthdays.

When I suggested going somewhere else for her birthday dinner, she started singing, "Traditioooon! Tradition!" from Fiddler on the Roof, so that settled any discussion.

After dinner, we walked over to the mall to let Avril pick out a gift from the Lego Store. She was given a reasonable budget for one kid, one gift.

But when she asked for input from her sisters, the girls all agreed they'd love a particular set, but it was over-budget for just one kid...

But Adele's birthday would be coming in a little over one week...

So by cleverly offering to combine their birthday gifts into this one larger Lego set that they could share, they persuaded us to purchase something over-budget, but bigger, better, something they both really wanted, and best of all, we could avoid coming back to the mall again next week.

We took the deal!

Adele has other ideas for her birthday dinner.  She wants homemade spaghetti and a special dessert she saw in a kids' cookbook, so there won't be a need to return to the mall for dinner and cheesecake, either.

So we came home with one gift for both girls.

That was totally unplanned, but it really works.

It was a great night with lots of laughter and some intense, good-natured negotiations. 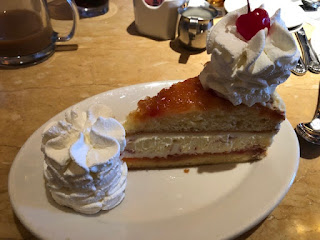