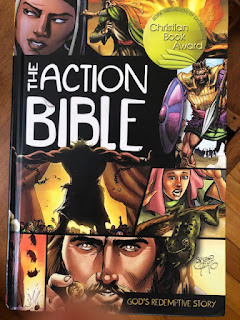 "Mom, Jesus just had an epic Scripture battle with Satan, and He won!"

*proceeds to narrate the entire temptation of Jesus in detail*

-My youngest daughter after reading The Action Bible one afternoon

It may even make me more skeptical and suspicious to find out most people like something.

Of course, my kids were drawn to graphic novels like every other kid who ranges the stacks at the library in summer, but I was on the fence about them until I saw an outstanding graphic novel done on The Iliad by Gareth Hinds.

After I picked my chin up off the floor, shocked at how beautifully done the work was, I quickly purchased it and then slowly started purchasing others including The Odyssey, Poe: Stories and Poems also by Gareth Hinds and The Hobbit by Charles Dickon.

In that context, I found the graphic Bible shown above at the library book sale, and it was nearly free and brand new, so I also bought it and then promptly hid it until Christmas, so I could gift it to my youngest daughter, who had asked for a Bible and also happens to love graphic novels.

Note: I also bought her an actual Bible with the actual text. I'm no fool.

But the last few weeks, she's been reading this graphic Bible for her silent reading time.

I had reservations about allowing her to do this.

I like her to use her silent reading time to read the best things.

This is a graphic novel...

But it's also the Bible.

So what to do?

I let her read it.

I have been pleasantly surprised and ultimately, refreshingly humbled, by how much more Biblically literate my daughter is in only a very short time.

Like I described above, she was able to narrate the temptation of Christ in detail, so she is getting a good deal more than I would have thought possible from this graphic Bible.

I also notice that she still reads her regular Bible other times throughout the week, so it's not like she favors this Bible over the other.

It may be my imagination, but she seems to be reading the Bible more and copying more Scriptures and it is certainly coming into her conversation more.

I fear they will "ruin" the real book for my kids, and because my kids have read the abridged versions or some adaptation, they might think, "I've read that," when they really have not read the original book at all, and then they will be less likely to pick it up again.

And that may actually be true for some readers.

I am a teacher, so I can see how that might definitely be true if the readers reading graphic novels or abridged versions or adaptations aren't really readers at all.

If a student is reading begrudgingly and under compulsion, probably nothing but the actual book will be enough to help them overcome their lack of discipline or interest.

But I have found that in a very literate family like ours, where everyone reads all the time and is constantly discussing books, graphic novels aren't devastating to our reading habits and appetites, quite the contrary.

This seems to be true of the families of my students who are also avid readers. Not neglecting the actual texts, these families don't hesitate to enjoy graphic novels, even abridged texts, even at times, adaptions or fan fictions, because they just add those materials into the great conversation they are having in their homes.

These materials, graphic novels and abridged versions and the like, have the same sort of place Charles and Mary Lamb's Tales of Shakespeare has.

Tales of Shakespeare introduces my kids to the major characters and plot points in a Shakespeare's play before they read the whole play for the first time.

Note: Even the grown-ups in our home find the summaries of plays helpful if it is the first time we are reading a play or if it has been a while since we have read a play.

Similarly, for the great stories, the type that can't actually ever be spoiled, the graphic novels we have seem to serve to introduce my young ones to the plots or characters or ideas and even seem to make them more likely to read the unabridged original text at an earlier age and more often than they might have otherwise.

The graphic novels and abridged versions do actually seem to excite them and peek interest.

But again, this may be because the readers reading them are already disciplined and enthusiastic readers rather than begrudging readers.