Cup Stacking, Board Games, and Archery 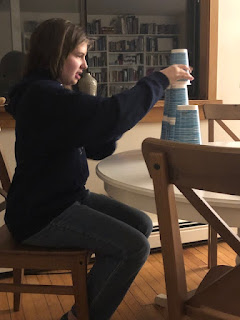 We joined a new homeschool co-op.

Actually, it's not new a new co-op at all; It's a very well-established co-op that's been meeting at our church for many years.

So it seems like it should have been an obvious choice for us to try to join it a while ago.

But for a long time, I worked part-time teaching and also subbing as many fitness classes as I could manage to fit into my schedule.

During that season, there was a real concern that we might not get enough school work done unless I was home when I was home and we were doing school when I was home, so the only co-op we ever did was our weekly CC meeting.

Now that I am not working, I am thrilled to discover we have this thing called "margin" and now we do the sports and we can even join another co-op!

But honestly, even if we found out that we couldn't do as much school work and we ended needing to adjust something and do less, we'd probably go ahead and do that and make this co-op a priority.

It only meets every few weeks.

And while academic work is going to remain important, relationships become more important.

Lately, it feels as if the Lord has hacked my personality and I'm not even an introvert anymore.

I'll have to turn in my introvert card after admitting all of the following:

I am in a season where I literally long for people, and I am actually energized by them.

On top of that, when I am not physically with others, I actually continue to think about people and pray for them hours and even days later, and then I reach out to them via phone and text and cards.

Make what you will of it.

But I was once the most intense of introverts.

Now there seems a vast space inside me with room for others.

To me, this change is squarely in the category of "miraculous," but also totally expected and simply evidence that there is a Spirit at work within my spirit.

That Spirit is the original extrovert who began with, "Let us make man..." and continued with, "The second is like unto it: Love thy neighbor.." and ended with, "A new command I give you: Love one another."

The Lord calls what is out of what is not indeed.

So it was a true delight to be at this new co-op and with its lovely people, many of whom I already know from CC or church.

The co-op classes focus on fun and enrichment.

My youngest is taking pottery, board games, and chess club.

It'll dry before next class, then she'll paint it, then the teacher will take it home and fire it and bring it back, etc.

I hope it will eventually live on my dresser forever.

I was really impressed with all the adorable things that the pottery students had made and were in the process of working on, and I wish kind-of there was a pottery class for the moms.

My oldest signed up for cup stacking.

(It's a thing. We had no idea until we saw it listed on the class options and did a Google search to check it out.)

My oldest came home from co-op and proceeded to #1. ask and ask for a set of official quick stacking cups until I sat and ordered them off Amazon and then #2. promptly started practicing with disposable coffee cups.

She's also in board games and archery.

The archery teacher also happens to be our kids' most beloved pastor and our family's dear, dear friend. He never fails to speak to us if he sees us in the church lobby, and though it seems a small gesture, after years of that consistency and kindness, he's built an incredible influence with our girls.

Again, joining this co-op was an obvious choice.

After co-op, we even went on to go to lunch with friends at Chick-fil-a.

In all seriousness, I am truly, very thankful for the fun we had in the classes and the new stuff the girls learned about, but mostly, simply, I joy in the extra time spent with others.