Posted by Veronica Boulden on December 12, 2022 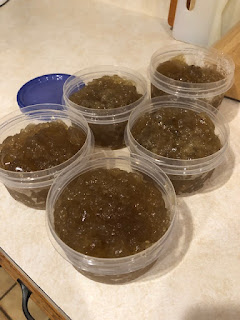 Last week included a new culinary adventure.
I purchased a free-range whole chicken from a local homeschool-mom farmer-friend.
And when I say whole chicken, I mean it didn't have any feathers, but it still had some of its organs and its feet and head with the comb.
Since first reading about making bone broth many years ago, I've always wanted to try making stock with the chicken feet and comb included, because those parts contain much more of the rich gelatin that nourishes our bodies.
This chicken had black feathers, a black comb, black feet, etc. so the broth came out a dark brown.
Once the bone broth was done, I didn't get a lot of meat off the chicken, but I didn't expect to, since the chicken was raised naturally on a local farm, so it was much smaller than the Franken-chickens sold at the store that we are all so used to. But I got enough meat to make a big pot of chicken and wild rice soup.
The darker chicken meat paired well with the wild rice in my soup. I enjoyed some of the soup right away, ate leftovers for a few days, and froze a large jar for a time when I might be sick and in need of a nutritious, easy meal. 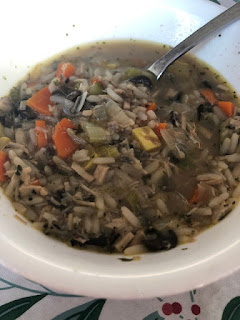 I was impressed by how much gelatin the first batch of broth had. I froze several cups of the rich bone broth to use in meals this winter.
I made a second batch of broth with the same bones and leftover scraps of meat I didn't use in my soup. This broth came out much thinner, but I made and froze several cups that will work for soups and chilis and in place of lifeless, boxed or canned store-bought broth.
In all, it was a successful culinary adventure. I've leveled-up in my bone broth making skills.
Recipes