Posted by Veronica Boulden on December 15, 2022 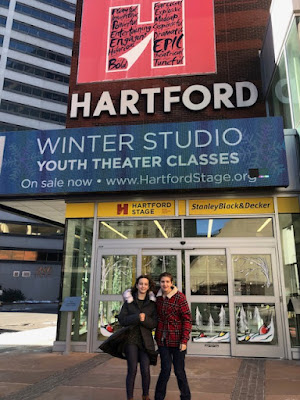 We attended It's a Wonderful Life- A Live Radio Show with our Change Homeschool Co-op yesterday.

The set of the play was an old-fashioned radio studio with several standing microphones and a sound effects station. (Imagine the radio show scene in the old movie Annie.)

The Hartford Stage is unique because the stage is below the seats, and the first row is literally on the stage.

That's where our kids were sitting.

So there's some fun interchange between actors and audience.

We watched the cast of the play pretend to put on the play for a pretend radio audience...

So that was a bit mind-bending, and there were layers upon layers of acting and imagination at work.

Watching someone produce a radio show is riveting by itself.

Watching someone produce sound effects is interesting by itself.

Watching a lively play is one of the greatest treats of the human experience.

So this play was exponentially fun.

Sound effects came from an old fashioned sound-effects station with paper bags, plates, bells, brushes, shoes, a miniature door that could be slammed for effect, etc.

That was a delightful element, even to the grown-ups.

I was most impressed with the sound effects the actors and actress made with their own mouths at times. These moments of the play reminded me of some of the funniest improve shows I've seen.

I really appreciate actors and actresses who can really abandon themselves to a part.

So it was the best of comedy.

But the show also brought me to tears, because the story of George Bailey really works on me like that anyway.

At one point when the story gets really serious and deeply spiritual, the radio show microphones are whisked away, and the actors truly enter the play.

That was a really outstanding choice by the director.

I'd see this play again in a heartbeat, so as to see all the fun again, but witness how the same show might be slightly different the next time, because of all those unplanned, human elements involved.

I'm not a big television or movie watcher, but I think I could see a play every single day of my life.

I need to remember that and make time to go to plays more often.

I'm so thankful for the mom in our group who coordinates these field trips.

This one was delightful!