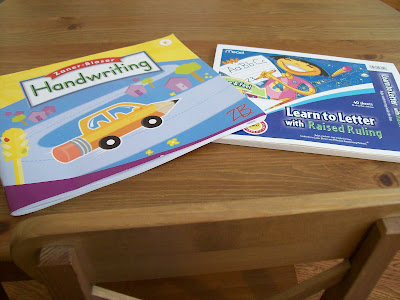 We have made our choice for the 2nd of The Three Rs: Ritin' (Writing):

Norah has learned to identify her letters, upper and lower case, has been introduced to their strokes and has been taught how to hold a pencil in her K4 home school program. But, now she's handwriting obsessed and has taken to writing lines of letters everywhere, "JaBDEt. Does this spell something, Mommy?" and since her K4 program didn't drill handwriting, making her sit still for several minutes and practice rows and rows of each letter, mastering the strokes at only four years old (which I liked), she, unfortunately, has begun writing the letters with incorrect, inefficient form. So, in an effort to take advantage of her current enthusiasm and prevent her from solidifying any of the bad handwriting habits I see, she and I are starting a more formal handwriting program, doing as much drill as her attention span will allow.

I chose Zaner-Bloser's Student Edition K and ordered it directly from the publisher's website. It was recommended in The Well-Trained Mind and follows the method and style of printing that I prefer. We already had a pad of writing paper Mead's Learn to Letter with Raised Ruling, which I like since it is thick, won't tear when you rip it out of the book and has a raised baseline. We will probably use, on average, one sheet for extra practice writing each capital and lower case letter and still have some empty pages left over to use with our next handwriting program.
Posted by Veronica Boulden at 8:00 AM