Skip to main content
Posted by Veronica Boulden on March 18, 2010 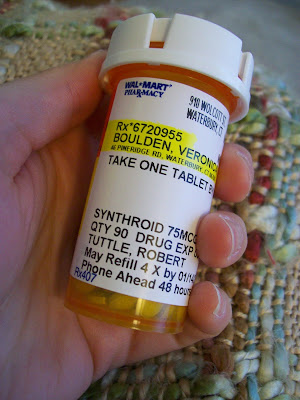 I took the pill at 7am. I was still half asleep. I'd gotten up to go to the bathroom and then snuck back to bed until the girls were awake. An hour and a half later, I was sitting at the kitchen table, eating breakfast with the kids, trying to figure out why I felt so different... so... good. I hadn't gotten that much extra sleep, so I shouldn't feel so rested and alert. And, I hadn't drank any coffee... That's when it hit me. I'd taken my first Synthroid pill that morning! Was it even possible for me to feel the effects so soon? Was it all placebo? I don't know. But, I don't think I can even describe the relief I felt and after only a few hours on the medicine. The invisible elephant that I had been dragging around all day everyday was just... somehow... gone. Perhaps the effects will wear off or I'll get used to them. I remember the first few days after we put new insulation in our house, we went around just tearing the layers off, wearing shorts and t-shirts. It felt to us like we were weighed down with heavy blankets, it was just so hot in the house! But, after a few weeks, I also remember that we'd gotten used to it and started to feel the cold again. However, for now, the burden of fatigue I've carried for so long has been lifted and I can feel it to such a degree that it is like I could just float right up into the sky and I am praising God for this leg up.