Skip to main content
Posted by Veronica Boulden on March 19, 2010
My dad is a retired police officer, so he's got stories, countless stories. And he loves to tell them. And we love to hear them. (He's the best story teller alive). He's been emailing me some of them, so I thought I'd provide a place on my blog to share them. I've edited them a little. (He types in all caps, just like he writes). I wish he'd consent to having his voice taped, since I think his tone and timing make the stories ten times better. But, he won't do it, says his voice "sounds funny."

His nick name was always "Snave," my maiden name "Evans" spelled backward, so I made that his new label. Below is a photo of my father standing by his patrol car sometime in the seventies. My sister and I always say, "Wacka! Wacka!" and raise our eyebrows when we see this old photo. And, to that, my dad always blushes and smirks. Isn't my father handsome? Below is the first and so far, the funniest story he's sent my way. Enjoy! 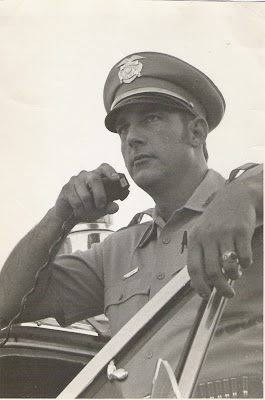 "One Sunday morning, the fire department got a call for help. It seemed that a train had hit a car somewhere outside of town. Out where it happened, there was nothing but fields as far as you could see, no trees to block the view at the crossing or anything like that. The highway patrol heard the call and asked the local police to send a unit out to check for any injuries. Since it was Sunday morning, they didn't have any troupers on duty.

When I got there, I noticed an old lady, probably early nineties, standing with the firemen. The old girl was mad and fussing at someone who appeared to be the train's conductor. She wasn't hurt. She was just mad and raising heck with everybody, but mostly with the conductor. Turns out, the train hit the old lady's Buick in the rear seat area. It had pushed the car about forty or fifty yards down the track and the car was badly broken up.

I told the old lady, 'Look, I am just helping out the highway patrol until they can get a patrolman here." I asked her, "Are you sure you are not hurt? That was a bad hit your car took. By the way, I am just wondering why you didn't stop for the train? Did you see it coming?'

This is word for word what she told me, 'Listen, Sonny, I have been coming into town for church every Sunday for over thirty years and I never met a train here. Sure, I saw it coming. But, I was first and had the right of way. They should have stopped for me. I got there first!'

To that, I bit my tongue and told her I had to go back to town."