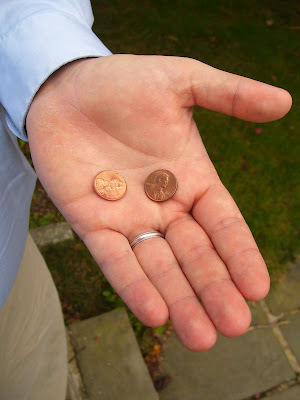 When you see this photo, know that my husband wrote what comes next.

Last Sunday, the sermon centered around leadership, but one point dealt with Johnathon Edwards' comments on patriotism. With much respect for our Pastor, after finding this article, it soundes like Edwards held some crazy ideas. In fact, he wouldn't fit well into today's political groupings at all from what I can tell, wanting government funded Christianity; state welfare were laziness is not allowed, etc. However, some of the points made are still valid.
In particular, the idea that patriotism is not that important in the grand scheme of things was convicting. A lot of mental energy gets put toward politics, and much of the news we consume is centered around Washington. As Christians we need to make sure we are finding the right balance.
I do not want to rehash the article linked above but instead to consider a few thoughts on the very nature of government in America as it relates to the Christians' subjection to it.
Romans 13 is pretty explicit. Christians are to obey their government. However, I think there is a fascinating dynamic here in America that changes the picture unlike any other time in history. When Roman's was written, the ruling body was, well, Rome. While Rome was a republic, the very rule of law was still embodied in the consuls. All civilizations have been based on this model, where a person or persons is at the top. Even today's representative governments like England are still centered around a royal family. Always the central figure is a person. Until a pesky group of revolutionaries decided to try something new. Instead of a person being the center of the governmental structure, a document was. This government was designed to operate as a government by the people and for the people, with no person at its head, but a document. This is why what we refer to as the highest office is simply that, an office whose express goal is to uphold and defend the constitution of this nation.
Take now, for instance, the idea of Paul writing to a group of believers challenging them to subject themselves to the rule of Rome. This is a heavy request. The leader of Rome at most points in history, and certainly Nero during this period was a heavy handed dictator. Christians were made to suffer under his rule, and yet they were requested to be an example of good in their community by subjecting to the atrocities committed by Nero.
What happens then when a document is the ruler, not a person? When a person is in rule, they can set and change rules as they see fit. In America today, a document is our ruler. Our governmental body is there simply to carry out that constitution's directives. We have the unique privilege to be governed by no man. We govern ourselves. We elect for ourselves representatives to serve us. We impeach those who fail in their duty to obey its directives. America in theory is a nation ruled by the people's own desires as detailed in the constitution, amendable as needed.
So when scripture tells us to be subject to our rulers, we are not under the same obligation as 1st century Christians, or even the 21st century English. We are not subjects; neither to a monarch nor a dictator. The men with badges or the ladies in office are not our rulers. They have been asked to perform a service, at our request. We are bound to obey and follow one document (two really depending on your state). So if a police officer asks to enter your house for an inspection (as happened in Danbury a few years ago), you should say NO. This is not being insubordinate; it is obeying our ruler, the constitution. If a police officer asks you to answer some questions, and you do not want to, you don't have to. This is obeying the rule of law. When a corporation makes a major mistake, and spills millions of gallons of crude oil into the ocean, we should not sit quietly as the President informs us that he is forcing a foreign owned company to do anything, not because we do not agree with the principle, but because such action is completely outside of his given authority.
As the American experiment continues to change, there may well come a time when the decision is made that men are not capable of ruling themselves under the guide of our constitution. At that point (and we seem to be on that path) we as Christians will be subject to the rulers put in place. Until that time, I believe we should do as much as is in our power to keep our freedom and liberty. For out of this model has come the most successful society in the history of the world. And I believe that with our success, we can do more good for the kingdom of heaven then we could without it. Freedom for freedom's sake is not valuable to the Christian. Perhaps in God's economy we would be better off without our freedom; certainly there is biblical support for the work of God thriving under oppression. But I think we have greater abilities to do good for the kingdom in freedom, and therefore, I believe it to be a cause worth investing in.
So yes, we are citizens of heaven, first and foremost. We should not take too seriously our national pride as it often comes in conflict with out heavenly pride. However, I believe we have a duty as a part of this particular nation to be active and involved in the governmental process, to invest in maintaining our freedoms, and to know follow and uphold the constitution.