Skip to main content
Posted by Veronica Boulden on June 19, 2010 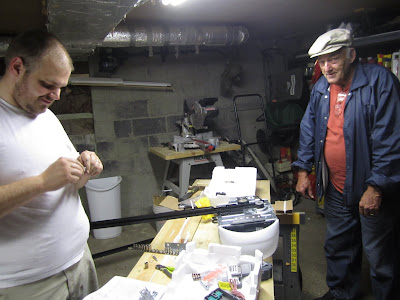 My parents came to stay with us last week. The tear in my leg was still far from healed, but Dwayne had to get back to work, so my mom and dad came to help me with the kids during the day.

And, let me just say, that this week, as they've been here and as I've seen my husband interacting with my dad and mom again, the Holy Spirit has been confirming to me the choice that I made in marrying Dwayne. I am still so glad I did so.

Other people I dated shared some of the same qualities with Dwayne. They were godly and strong and hard working and they loved me. But, for me, Dwayne has always exceeded what I asked for or even imagined in a man. You know how the verse goes. Ephesians 3:20. And this is particularly true in the way that he loves my family. I'm not sure any other person would have been able to love them like he loves them, without effort or effect, honestly and from the deepest, most sincere part of himself.

Now, don't hear what I am not saying. My family isn't awful, but they aren't perfect, either. Dwayne's never made them ashamed of who they are and in turn, he's never made me feel like I needed to somehow explain where I came from (something none of us have any power to do anything about, by the way).

Around Dwayne, my parents have always felt that they could be themselves, that they were allowed to take pride in us as a couple and that they could have real ownership over their grandchildren. In all this, they've taken their ques from Dwayne. My mom and dad could always tell, without question, that he accepted them. And I just adore my husband for this.

Now, this isn't why I married Dwayne. It's not like I evaluated potential spouses based on how much they liked my family or how much my family liked them (though I did ask my parents for their blessing to marry Dwayne, out of respect. I trusted that even if they said, "No" for some reason, God would eventually, somehow, lead them to say, "Yes.") I chose Dwayne for other, more obvious reasons at the time, like how much he loved Christ.

To be honest, this is something I wasn't even considering when I said, "I do." I was just excited about all the blessings Dwayne would bring me. How could I have known how far reaching God's blessings would go or how much it would bless me to see others blessed by our marriage? But, this is just one of the many benefits I've discovered from making the right choice in who I married.

My husband has become a sort of second-son to my father, in addition to my older brother, of course. My dad takes a lot of joy in him and I know the feeling is mutual. And, once again, I am humble and thankful that I was given enough wisdom and grace (mostly grace... God had to push me and shove and then trip me into the right direction.) to chose the man God chose for me.

The father of a righteous man has great joy;
he who has a wise son delights in him.