Fill Our Lives With Music

Posted by Veronica Boulden on December 11, 2014 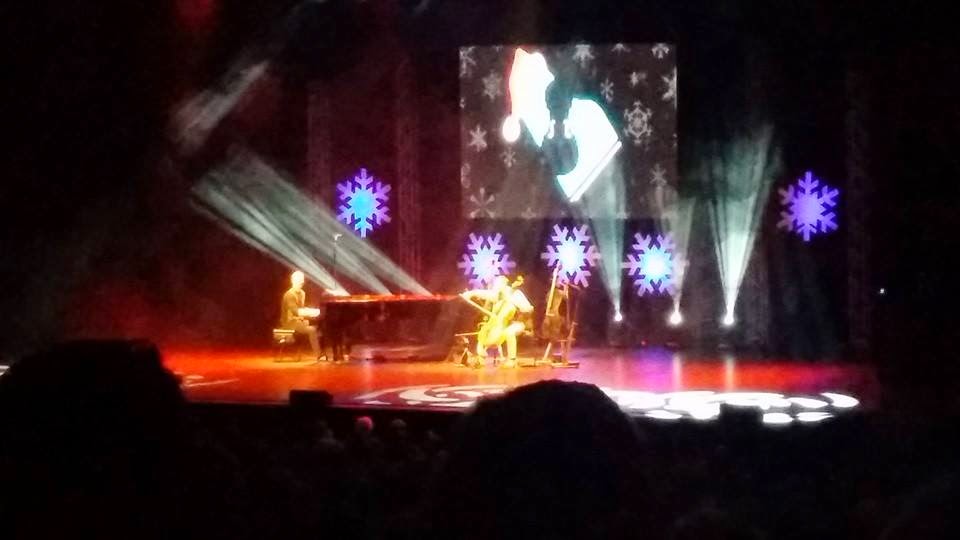 My husband and I went to see The Piano Guys in concert last night in Wallingford, CT at the Oakdale Theater.  I bought the tickets as a Christmas present to my husband, though it is still early in December.  I usually ask him before I do anything like this, but I know he is the sort of very frugal guy who will talk himself out of spending any money on himself. I also knew he really likes The Piano Guys and he didn't even know they were going to be in Connecticut, so if I bought the tickets without asking, it was going to be a total surprise.  So I got them and then quickly told him I was taking him to the concert. That way he was surprised, but he also knew and he wouldn't make plans to go to dinner with someone for business or something.

The concert was a beautiful experience. We were both moved by the glorious sounds. Our hearts were lifted toward the divine. And I was surprised to be so moved by the feel of the music. Now I know, there's nothing like sitting in the same room with live instruments. Hearing instruments is wonderful, of course, but feeling them play really can't be beaten.

Earlier in the day, I was praying and I felt led to ask God to "fill our lives with music."  As the words came out of my mouth, I was really surprised by them.  But, sometimes, when I am praying, I become aware of things I don't even realize I am lacking and I am led to ask the Lord to fill that gap or meet that need or add that blessing.  Neither my husband or I play instruments and we have often thought about giving our kids music lessons, but so far, we have found it impossible for practical and financial reasons. I am also not entirely sure we understood why music was valuable enough to invest time and money in.  So I prayed about it and then forgot about it. I wasn't even thinking about the concert as I prayed, believe it or not.

But, as I sat in the concert later that night, the prayer came back to my mind and I chuckled to myself because it felt like the Holy Spirit was saying, "I am already answering your prayer. I will answer it.  I was already answering it when you prayed it." And as we were walking to our Jeep after the concert, I was not at all surprised when my husband said, "We need more music in our lives. How can we make that happen?"  I laughed and I told him about my prayer and we talked about it.

We're still not sure how it will come about, but we know it is something the Lord is doing and that makes us really hopeful.  Music is such a gift.  God made the wood and metal that we use to make instruments.  He made the plants that make the air that sound waves travel through.  He made our ears with the tiniest of bones to pick up pleasing vibrations.  And perhaps most importantly, He told mankind to "Sudue the earth." Music is one way we do that.

Like everything else, music is often misused and it can reflect the evil in the world as often as it reflects the good. But, in itself, music is a glorious, good thing. No wonder it surrounds God's throne.  No wonder we long for more of that sort of thing in our lives. And no wonder our good God is happy to inspire and then answer prayers for more music.

There are so many good Piano Guy songs I could share, but this is one of my favorites right now.
Spiritual