Skip to main content
Posted by Veronica Boulden on February 14, 2011 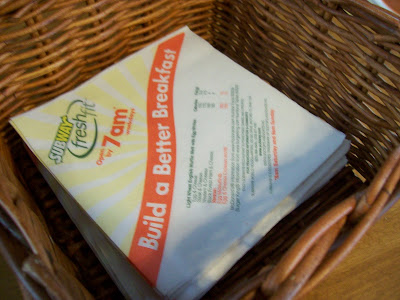 When we ask God to provide for us, He will. But, it may not be exactly what we had in mind... I've come to learn that He cares very little for vanity.

Take these napkins for example...

No. I did not pilfer napkins from Subway the last time I ate there. But, my church was having a lunch catered by Subway one afternoon... and I was helping with the cleanup... and the church did not want to keep the napkins... they don't really have space in the new building... so they were going to be thrown away... unless someone took them... so I took them.

The pile of napkins we brought home was as tall as Norah. I feel good about the fact that we saved a tree from being cut down for no reason and I like the fact that we haven't needed to spend any money at all on napkins in weeks and that we won't need to spend any money on napkins for quite some time, in fact. I guess I've used that little bit of money to buy books at the thrift store... or toothpaste... or...

The only thing that I have to do is overlook is the simple (yet glaring) fact that the napkins say "Subway." But, I am practicing gratefulness because these napkins represent much more to me than just napkins. I mean, can I really have ask God to provide for my family, but then say "No" because the napkins he throws in my lap aren't the perfect printed pattern of Quilted Northern to match my kitchen? I considered doing that. But, then I consider how God provided manna in the wilderness and they basically said, "Thanks, but..." and cried out for meat. The problem was never with the manna, you know...

It's not that I can't ask God for good things. It's just that I think His idea of good is radically different than my own. And, I know I wouldn't have even had the ability to use Subway napkins in my kitchen a few years ago. I would have considered them beneath me and their tackiness would have annoyed me to the point that I threw them away. But, I wonder how many other blessings I passed over at that point in my life because I was too good to see them for what they were.