Skip to main content
Posted by Veronica Boulden on January 24, 2012 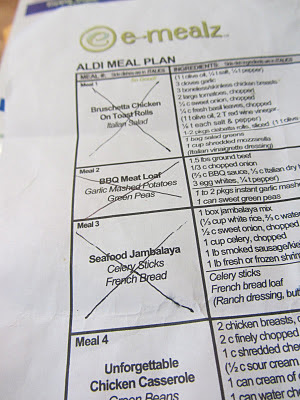 A friend of mine who is a blog follower purchased me a gift subscription to e-mealz. She wanted to remain anonymous, so I won't include her name. But I wanted to say publicly how her gift has blessed me already and recommend e-mealz to you all.

E-mealz allowed me to tailor the plan my friend purchased for me to the store of my preference, Aldi. E-mealz has a meal plan for just about every grocery store out there, I think. Aldi is my preferred store because it is so, so, so inexpensive compared to other grocers, but it's stock is also more limited than other grocers... so it's hard to find everything you need for every single one of your recipes there... or at least it was.

Dwayne and I had been discussing how nice it would be to find meals that we could make with all-Aldi ingredients, all the time, but it just seemed impossible... That's when I got the email from my friend about the gift subscription and that's when I chose a plan for all Aldi products, all the time! It really was a perfect gift, perfectly timed!

So, now, as long as I follow the meal plan they provide, all of the ingredients in my meals are available at Aldi. So, in turn, I get to take advantage of Aldi prices on all my groceries. This week, for example, I was able to get what I needed for seven dinners for approx. $60 dollars! Unbelievable!

Having a meal plan has also been positive because it encourages me to try new recipes. I had never made bruschetta, for example, but I made it for dinner one night this week and we liked it. It made for a nice, light dinner on a night when we didn't want something heavy.

I didn't go in order with the meals. I just bought the groceries for the seven meals and then I made whatever dinner I was in the mood for off that list of seven meals. That helps me from feeling too pinned down.

I have already found the need to alter the meal plan to my family's liking, but only in very subtle ways, but only subtle. On the night they said to make seafood jambalaya, for example, I left out the shrimp (since I am allergic) and used only the sausage. It wasn't seafood jambalaya, but it was still jambalaya and it was very, very yummy. And, on the night they suggested making BBQ meatloaf, I made a traditional meatloaf instead because I knew my family would like the ketchup- mustard- brown sugar topping better. So, I am finding it easy, very easy in fact, to follow their suggestions but also tailor the meals to my family's preferences in little ways.

And, there are leftovers! So the sixty dollars I spent was not just for our seven dinners in the end. It covers several lunches of leftovers (and if you are pregnant and jambalaya sounds good in the morning like it does to me, it can even cover your breakfasts, too!)

So look into e-mealz. It's been pretty awesome for me so far.
Cheap Thrills