Skip to main content
Posted by Veronica Boulden on January 27, 2012
I dabble in unit studies. I don't dwell there, though, because I can't seem to find a way to teach all that's necessary for Norah to know without using textbooks and worksheets. But I do like to dabble in unit studies. They make home school life worth living, I think.

I build our units around what we will be doing, what we are doing and then once we've done it, I keep building on what we did. We are in the midst of the makings of a unit on New York City's landmarks and the unit study is practically building itself. Here's how. 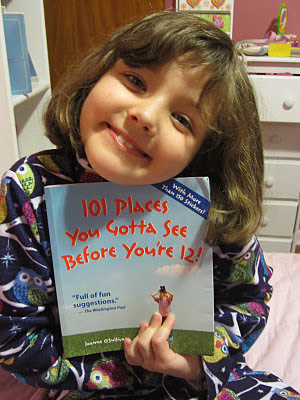 I knew we were going to NYC for doctor's appointments. Norah has 101 things to see before she's twelve. I knew that there were bound to be some things on her list that were in the city.

I also see that riding "a subway" is another one of the things on her list. We'll have to park our car near my doctor's office and get over to Chinatown anyway, so riding the subway will be an easy thing to add to our plans.

I read about Chinatown online and find out that there's a big Buddhist temple open to tourists. "A place of worship" is another thing on the list. We'll go there, too! Are you kidding me?! This is awesome! And so, our first day in NYC plans itself, practically.

The next week, we have to go back to the city. I look at the list again to plan some more stuff. I see that "an amazing architectural achievement" is on her list. So I think about seeing the Empire State building, but only tentatively. I'd like Norah to be excited about what she sees and appreciate it. Will she appreciate a tall building she knows nothing about?

A day later, I come across this book at the thrift store, so I buy it for .65 cents, give it to Norah who reads it to herself and then wants to read it with me. She's interested now. 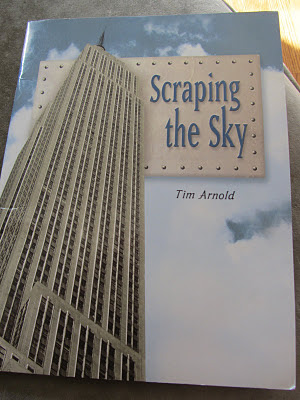 The book led her to the idea of making a scale model of the Empire State building with Legos. Enter her dad because he's better at math. That evening, he figures out that if Norah is as tall as a Lego figure, the model would need to be forty feet tall! Obviously Norah can't build a tower that tall so her dad does some more math with Norah's help. She helps measure the Lego pieces since that's something she can do. Dwayne figures out that if the small, round, black Lego at the bottom of the Lego tower in the photo below is twice as tall as Norah, then this tower is about as tall as the Empire State building. The green block represents our house. Our unit study has included some math and a building project now, too! How fun is that? We're all excited about the Empire State building at this point and the decision is made for me by the rest of the family. We're definitely going to see it. 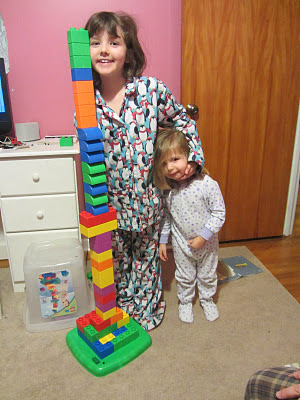 When we go back to the city, we visit the Empire State building and take a picture and Norah blogs about it. Norah gets to check one more thing off her list. 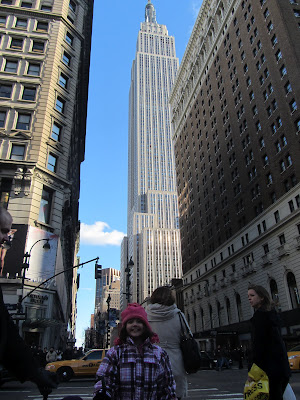 We also visit Grand Central. "A marvel of engineering" is another thing on Norah's list and Grand Central is still a marvel of human ingenuity after all these years, still shuffling the most trains of any terminal anywhere, serving hundreds of thousands a day, getting them where they go with 98 percent of them on time. 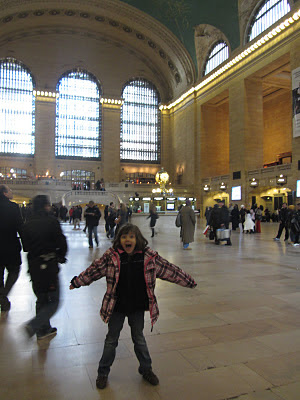 What?! We've seen all those places on our visits to NYC! This book will be a perfect fit for all we've seen! Norah will relate to the story so well. I plan to start reading it in the next day or two, as soon as I finish reading another book I'm reading out loud right now.

We're going to the library again soon. Norah really enjoyed the book about the Empire State Building. She's read it two more times since the first go through. Maybe there are other books about the Empire State Building that are on her reading level. Maybe there are books about NYC or Chinatown, too. I look at the catalog on line and find twenty books that match those topics and they all seem good! We head to the library right away.

I do a Google search on the Empire State building and find this puzzle. I find this one for Times Square. Those might be fun, but they are expensive and too difficult for Norah to do on her own, so probably not. But I keep looking. Next I find a Dover coloring book with NYC landmarks. I love Dover coloring books. And they're affordable. We may order that in the next day or two.

And so, a unit study on NYC has begun. It's building itself, practically. I'm not sure where it will end or even when. But, like I said, unit studies are the most fun way to learn. Studying things we are interested in makes all the other, necessary grammar and arithmetic and handwriting seem so much less dull. Thank goodness for unit studies!
Homeschool