Skip to main content
Posted by Veronica Boulden on January 05, 2012 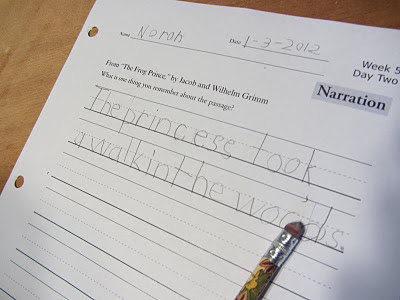 While my kid was doing school today, the light bulb went off for me. It was a strange sensation, but good, too.

We were doing Writing with Ease and she had to write "one thing she remembered from the reading" on her writing worksheet. She came up with the sentence you see in the picture without any trouble because she's great at listening to stories, retaining almost every detail and narrating everything back to me.

Previously, I would just write the sentence for her either on the top of the paper or on a sticky note and then she'd copy it. But, the light bulb went off for me, like I said before, and I realized that I needed to take her through each word and teach her how to think about the words as she put them on paper and stop avoiding the real "work" of spelling or else, she may continue to struggle with spelling for far too long.

So, I told her I wasn't going to write anything for her this time and Norah was about to panic, but I avoided eye contact with her. Instead, I said, "'The' is the first word, so write 'the'" and then I left Norah to think about how to do that for a second, still avoiding eye contact with her so I wouldn't cave a just write the sentence.

She wrote 'the' perfectly. Or, I should say, she spelled it perfectly, but she didn't capitalize it. "Perfect spelling." I told her. "But, 'the' is the first word in the sentence, so it needs to start with a capital T." She groaned and erased it. It was then that I realized I was really on to something. Because Norah had just been copying the sentences as she saw me write them, she never really had to remember to capitalize the first letter of the first word of a sentence because the first letters in my sentences were always capitalized.She just copied them that way without thinking.

So, for every other word in her sentence today, we took the time to sound it out and then Norah had to write it without seeing it first. It was painful, but it was much more productive than anything we'd done before.

I realize that up to this point, her "writing" had really only been "copying." Copying isn't all bad, but it's not writing. Today, for the first time, Norah's writing lesson was closer actually writing and from now on, it will stay that way.
Homeschool