Posted by Veronica Boulden on December 29, 2016 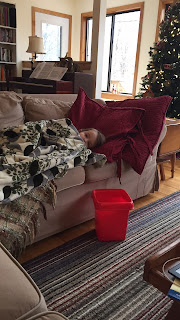 Adele was showing signs of being sick when she woke up yesterday. So we got out the puke bucket ready. And she eventually did throw up a few times.

I kept her close to me on the couch until I figured she was probably done throwing up.  At that point, she was perking up, talking a lot, and even wanting to play with her sisters. So I knew from experience that her appetite would be coming back within the hour, but that she really shouldn't have any sugary foods that would further weaken her immune system.

So I made her some savory soup, and she actually ate it! So I think I'll record the recipe to use again, when the time comes.

This much will make two small servings/ one regular serving.  Increase all the ingredients in proportion to how much you want to make/ have left over.

Add barley and turn up the heat, so that the soup will begin to boil as you add things. But then turn it down to low/ medium to simmer once it starts to boil.

Chop the carrot and green beans into tiny pieces and add them to the soup.  The barley is still hard at this point.

Add the garlic, dry onion, parsley, and salts. Garlic, because it is good for your immune system.  I would have used fresh if I had had it.  And sea salts, because electrolytes!  And I use Kosher salt, too, for flavor.

I had some cooked beef, so I chopped that up and added it. (I had left-over prime rib, so I added 1/4 a cup to the soup.) 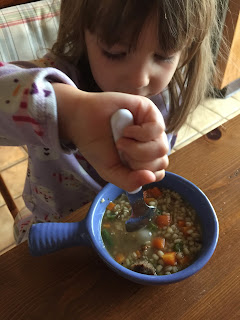 Adele, a.k.a. "Baby Bear," needed a total of two ice cubes to get this to the temperature that was "just right" for her. Then she ate it and perked right up.

I had a serving, too, since it looked so good, and it was cold outside, and I figured that I will certainly be fighting whatever it is she's got now, because that's reality for moms. 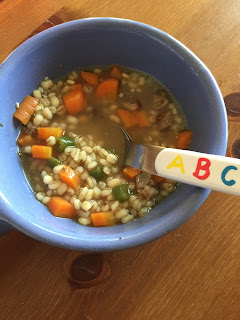