This Year's Christmas Gifts and The Stories Behind Them

Posted by Veronica Boulden on December 30, 2016
This year each child got one thing they really wanted from us.

With the move, we just didn't have time or energy or money to go all out.

Our family and friends sent some wrapped gifts in the mail and meant for them to be opened Christmas morning, too, so the girls did have more than one thing to open...

But, in all, this was a really simple Christmas.

And, I have to say, I think we got it right this year.

In years past, we bought a lot more stuff, so the girls would have more to open.  But every year, there would be gifts the girls never even played with.  That grieved me.

This year, the girls have been playing with their gifts every single day since Christmas and they are still talking about their gifts.

The prices of their gifts were not at all equitable, but the value of the gifts are the same in each girl's estimation, so we don't feel bad about not spending the same amount on each kid.

Each gift was thoughtfully chosen.

Here are their gifts and the stories behind them: 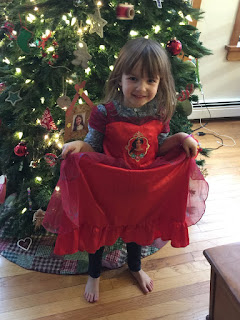 "Can I have a new dress-up dress? Did you know? There's a red princess now..."

The story behind the gift:

Her old dress-up dress was an Elsa costume from Halloween. It got so torn up, it just had to be thrown out. Even Adele agreed to throw it away, because it was so shredded, so you know it was bad if a four year old agrees it can't be worn anymore!

We did have other dress-up dresses. But those dresses were too big for her, purchased for her sisters when her sisters were bigger than she is now.  She did try to wear those, but they were so long and the fabrics so slick that it caused a serious tripping/ slipping hazard for her little legs on the wooden stairs. And after almost slipping a few times, she agreed, through sighs, that she would not wear those dresses.

"I will just wear my mermaid costume instead."  And she did.  That mermaid costume was from Halloween two years ago. It was really tight on her now that she's grown, but she she wore it everyday after we agreed she can't wear the bigger dresses.

So she went without an actual dress-up dress for a few weeks before Christmas. Imagine her face when she saw this red one with the princess she told me about months ago!   It was priceless! 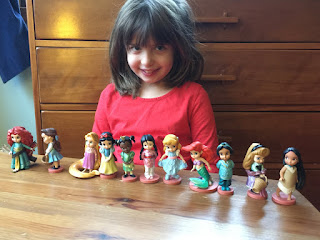 The story behind the gift:

Avril has a bunch of figurines similar to this already, thanks to family members.  She's proud of her collections and she plays with them almost every day and adds to them when she gets her allowance saved up.   So this was a perfect gift for her. And she'd never seen these particular figurines, so it was even better surprise. 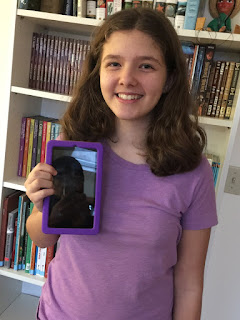 "Can I have a new tablet? I miss my games. And I really miss being able to read it in bed without the light on."

The old tablet was dropped one too many times and the screen was so badly broken that finally, glass chunks were falling off of it! It had to be thrown away.

Our family has a lot of paper books, and we have so many book shelves already, that we have started purchasing electronic books, too, in order to save space.

This kid reads a lot and reading is good and she can't read the electronic books we have without her own device and no way is she going to use mine when she drops hers so often!

So she gets another chance to take better care of a new tablet.  The condition is that this tablet must always be used with a screen protector and a case, something we should have insisted on before.  You live and learn, right?