Skip to main content
Posted by Veronica Boulden on January 08, 2010 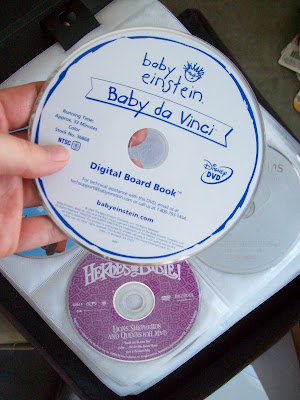 Avril's old enough to watch the Baby Einstein DVDs now. We purchased one for Norah several years ago, then we were given another one a year or so ago. So, I had a lesson in contentment the other day... when I went to pull this DVD from it's case and let Avril watch it.

For a moment, I remembered how sad it used to make me that we only had one of these for Norah. These DVDs aren't that popular now, but back when Norah was Avril's age, you may remember, they were all the rage. They were everywhere you shopped, on every shelf in every store. Wholesale clubs like Costco and Sam's even had a "special collection" that included every Baby Einstein DVD ever made.

At the time, it was really discouraging to me to go through birthdays and Christmases and paydays and more birthdays and more Christmases... without receiving them or having money left over at the end of a pay period to purchase another one. It seemed so important back then, for some reason, that we have them all or to at least be able to buy another one here and there until, maybe, we had them all eventually. I felt like we were being deprived of something Norah really needed or deserved... not that I thought they'd actually make her a genius or anything.

But, it occurred to me that the two DVDs we do have have just been sitting in the case for well over two years now anyway. I haven't thought of them once in that space of time, so, I realized it really wasn't that important after all. And, I was kind of shocked at how much greed had gotten such a hold on me over these silly little DVDs and I was mad at how much the evil one had once used this to make me feel discontent and prod me into thanklessness for that portion of Norah's childhood.

Then, I wondered... how many other things do I covet for Norah today, right this moment, that say... five years from now, won't matter a bit to me... just like those Baby Einstein DVDs?

And that is when I was freed, so to speak, from the tyranny of greed that I didn't even realize existed in this area of my life. It was (and is) easy for me to justify, too, since it was all for Norah (and since we can "hand it down" to Avril). But, it was and is still greed, none the less.

Be on the guard against all forms of greed, for a man's life (and the richness of our childrens' memories) does not consist of the abundance of his possessions. -Luke 12:15
Spiritual

Amy Wilson said…
So true! I struggle with "wants" for Belle too. I do have a couple cassette Baby Einstens I picked up at a flea market for 50cents, but I wasn't sure when I wanted to start showing them to her...How old are you considering old enough? 9 months? If I remember correctly, Avril is a couple months older than Belle, right?
January 8, 2010 at 12:35 AM

Veronica Boulden said…
In both cases, with Norah and Avril, I waited until I noticed their eyes tracking along with something that already happened to be playing on the TV. We have a large computer monitor that Norah plays her movies on and Avril's jumperoo is nearby, so I noticed her watching something Norah was watching for a few seconds, then looking away, then looking back... She still doesn't watch it without getting distracted, but that just may not be her "way." Norah would watch almost without blinking when she was younger than Avril! She was hypnotized! I loved it cause it would give me solid thirty minutes to cook dinner or something. ;)
January 8, 2010 at 8:30 AM

Jamie said…
I so, so get this!! I can totally relate in wanting to have the "whole collection" of something when we really, really don't need it.