Skip to main content
Posted by Veronica Boulden on January 10, 2010 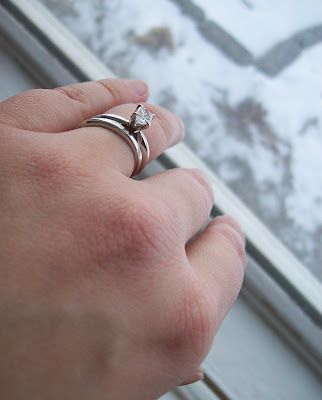 My baby's back and she fits like a glove.
I felt vulnerable without her. It might have been my imagination, but men seemed to be more talkative to me this week. When I asked Dwayne if he thought that was possible, he said, "We look." I said, "You look!?" He said, "Umm.. No. I mean, I did.... Umm... A ring's a quick sign that says to single guys 'Move on." Humph! That said, we will see if things get "quiet" again now that I have it back on. If what Dwayne says is true, I expect it will.

My size went up from 4 1/2 to 5 1/2, so they had to add some platinum to the band to make it bigger. I had a hard time dropping it off at the jeweler's, a harder time than I ever had leaving my kids in any nursery... and I always had a really hard time with that. I am not sure what that says about me, but I think my feelings for this ring have more to do with how sentimental I am about it rather than how much material value it has.

I am so thankful Dwayne was willing to pay to have it re-sized right away. It kind of feels like he gave it to me for the first time all over again. It was a gift he was eager to give me in the first place. And his lack of hesitation helping me get it re-sized quickens my heart. I can see that he is still eager to see it on my finger. And, I always wear it with pride because of my pride in him, because of my pride in us.
Family