Skip to main content
Posted by Veronica Boulden on December 29, 2009 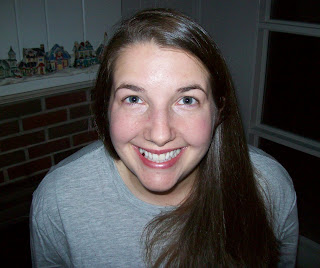 Look, Mom! No chins!
Just one chin. Singular.
No. Really, it has more to do with camera angle than anything else. But, I am loosing weight. I think. It's happening so slowly, I don't feel that surely about it at times.

I've been going to the trainer twice a week for months now. I've got four fitness classes on the schedule at work and I try to do at least three other cardio workouts during the week. I am eating better. My diet isn't perfect. I don't think it's ever going to be green enough and I still fall for french fries every so often, but its better than it was... So, I figure, it's about time I stop hating my photograph altogether.

Earlier this week, I was actually bent over in the isle at the store picking something out. Dwayne almost walked right by me. He didn't recognize me. When he realized it was me, he laughed so hard and said with visible relief that he had actually had a really hard time not checking me out as he was going by. He does this "eye bounce" thing when he finds it hard not to notice a woman who props her parts up for all to see. (I guess I need to bend at the knees more often myself.) But, I didn't know whether to be mad at him or to kiss him for saying what he did! After a lot of thought, however, I think I find it pretty romantic that if I were a stranger to him today, he'd still find me physically attractive, almost uncontrollably so. Growl! 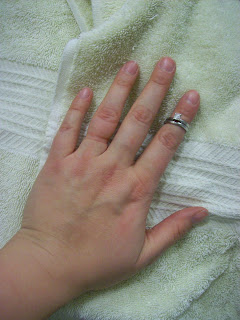 And, I got my wedding ring off for the first time in years, literally, years. I promised myself that if it ever did come off again, I wouldn't put it back on until it was re-sized. So, off to a reputable jeweler I go, as soon as my poor, fatter-than-it-used-to-be finger is able to stretch out as far as it needs to to look normal again.

So, the scale is moving in the downward direction for now. The only trouble I can see is that I think we want to have another baby and soon! There is some hesitation for me, I have to admit. There is some small, selfish part of me that wants to withhold myself and save my body the trouble a new baby brings. But, ultimately, we're talking about a dress size or a child. I figure I'll have enough time to slim up when the kids are grown up, God willing.

I read somewhere that "life that mares the body makes the soul." And, when I think about the stretch marks on my belly from carrying my babies, I think it's true. Their lives have literally marred my body, but they have also made my soul. I also think to myself that there is "a time for every purpose under heaven." And, this portion of my life is meant for bearing children (and conversely, for me, meant for gaining weight and trying all over again to loose it). But, I say, "God, give me children!" I can bear the weight (and pain and suffering and...) they bring my body for the blessings they bring my spirit. Children are a reward!
Family