Skip to main content
Posted by Veronica Boulden on December 28, 2009 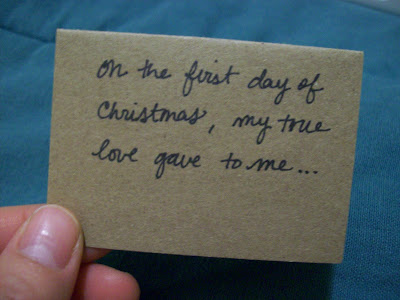 I have some reservation about sharing this, since it is of a private nature. So, if you are under the age of eighteen, I'd simply ask that you have enough respect for my wishes and stop reading now. Come back to my blog on another day.

I will not to go into the kind of details that will make the rest of you embarrassed or the kind that will embarrass me, for that matter. But, I wanted to mention that I did this. I started on the fourteenth of this month and gave Dwayne a "gift" every day until Christmas. I asked Dwayne if I could share this on my blog. He chuckled and said, "Sure! I want the whole world to know!" ...Typical.

Dwayne said this came at an important time in his career, when he was moving into a new position at work. He had meetings, important ones almost everyday leading up to the holiday. They were the kind of meetings that required neck ties, where he was faced with questions and had to give presentations that required the perfect words said at just the right time with just the right tone. He said it was the kind of week that would define the atmosphere at his workplace for years to come.

And, Dwayne would be the first to tell you that it wasn't like he was suffering from a lack of anything in this regard. So, that's not what made the twelve days an obvious choice for me, but...

I had been noticing Dwayne was burdened by an unseen weight for some time. His shoulders seemed to get lower and lower in the weeks passing. And, in turn, I was more stressed and worried seeing him more stressed and worried. I was praying for some way to lift the burden. I would try and coax him into talking about work, so I could encourage him or I'd cook really nice meals. I even tried to give him free time at the end of a long day, keeping the kids away from him at times when I really needed a break, but still, nothing seemed to be working. He was just sinking further under the weight of this new position and it's overwhelming responsibilities.

My feelings about all this were varied and swung all over the place. I went from pity for him for having to carry so much pressure, to worry that he'd crack, to pride over his new success, to frustration that no matter how much I did, I couldn't seem to bring him out of from under his dark cloud, to anger because he was so distracted and unable to relax or invest in his family once he was home with us.

But, as the twelve days started, Dwayne said he went to work every day as if it were just a regular day. And, as I watched him go, I could tell that whatever unseen weight he was carrying was gone, as if it had dissipated right into thin air. I looked for it again in the evenings as he came home, figuring that his burden would be back having just returned from such a stressful day at work, but to my surprise, the burden wasn't there and it never came back. As I say this now, I realize how funny it sounds in context, but it was as if Dwayne was floating on a cloud the whole week!

At the beginning of the month, I thought this was just my idea, just another way I was trying all I could think of to bless him. But, in hindsight, and seeing how God used it to accomplish the ministry I was seeking for a way to accomplish in my his life, I am sure beyond all doubt that it was God who lead me to do this. I think God's love for my husband must have compelled Him to give me the extra grace I needed to even consider doing this, let alone pull it off. And, I realize now, the week could have been terrible and sleepless and stressful for me, too! But, seeing how well Dwayne managed under it all, I was then able to mange well, too.

And, if I have any gift of interpreting what it is that God's Holy Spirit says to me, I feel like He wants us to know that we dodged a ton of bullets this week. I shudder a little to think how things might have gone if I wasn't obedient, if my spirit had been different towards my husband, if I hadn't have done this.

His word says God has wisdom stored up for those who ask for it. And, I feel like He threw this down into my path so that I would stumble over it and when I got up to see what it was that knocked me over I'd think, "Oh. Huh. This might work." ...Well, it did!

I wasn't one to diminish the role a wife has in her husband's life. And, I was never one to say that sex wasn't really important. But, that said, until now, I had no idea how much the two combined and multiplied by twelve had the power to revolutionize a man's spirit.
Family