Skip to main content
Posted by Veronica Boulden on December 22, 2009

That's a portion of a note Dwayne and I once passed during a lecture on the Bible several years ago.
His answer to my question would be the same today and it still makes me smile.

I spent four hours cleaning out my laundry/storage room last weekend. It's that place in our house where we put everything to get it out of the way, but once something goes in there, it's usually forgotten and just stays and stays and stays there until I get around to cleaning out the whole room, which only happens once every few years or so.

Towards the end of the task, I asked Dwayne to come downstairs to help move some of the larger boxes around. We came across one box containing sermon notes, college tests and terms papers, etc. all dated from our early days together. We had a good time going through them. In those days, we were preparing to go into full-time Christian ministry, thinking of graduating with our four-year degrees in religion and then attending Seminary somewhere. I must have drawn the picture below in reference to how much information we would have to retain during graduate school. 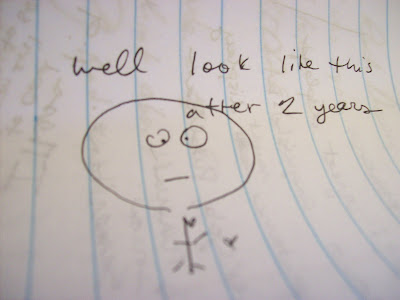 We never ended up going to Seminary or into full-time Christian ministry, for that matter. But, neither one of us doubts we are in the center of God's will for our lives. Dwayne is an engineer and he loves it, most days. I stay at home and quite happily pour myself into building up our home and raising and educating our two little girls.

In the box, Dwayne found one of his religion papers and read it to himself and chuckled here and there. He said, "I was so full of zeal..." and then just kept reading. He was also, as is usual, interrupted by Norah, who yelled, "Daddy!!! Can I do my Webkins?!" from the top of the stairs. He took a second to answer her, too, then went back to reading silently. I was listening to all this, going through another box. I smiled to myself and thought it was interesting that he was reading something written by himself so long before he knew Norah, long before she even existed, but now, she's his whole world. When he was finished with the paper, he smiled, looked up and said one thing that summed it all up, "I am a very different person now."

We found the same to be true about me, too, from reading my notes. One, obviously written in a hurry on the back of a class handout said, "Dwayne, Thanks for bringing my keys! You have the key to my heart. Love, V." The way the note was weathered, it must have been left on his car under his windshield wiper. I remembered that I did that quite often back then, before he and I had cell phones, before most people had them. Later, we found a page of my sermon notes with the words, "Thanks for getting my keys for me." written in the margin. He must have been sitting next to me and I wrote the note so I could communicate with him while the sermon was going on. The two incidents were totally unrelated, so I must have misplaced my keys on two separate occasions! The second time, he must have found them before I even knew they were missing and held onto them until he saw me again. I laughed so hard at that. I was always misplacing my keys back then. I had a hard time keeping up with anything. Looking back, it's as if I was always working from behind, just struggling to stay awake let alone remember all that I had to bring along or get done. But, now, I seem to have all the energy in the world, so much so that I hardly even need to sleep. (I am writing this post well after midnight). And, these days, Dwayne could ask me about a screw he took out of the wall two years ago and I could tell him where it is, right down to what side of the junk drawer it is on. So, practically, I am a totally different person now, too.

We laughed and hugged and talked about how things had changed and that lead us to talking about some of the newly married couples we know now, the ones who remind us of how we were back then. We hear about some of their struggles and empathize, often with our teeth set on edge because the pain is still so real to us, it is like nails on a chalkboard. Yet, at the same time, and not to be rude, but we can hardly believe how insignificant those conflicts seem to us now, after eight years of marriage, two kids, a career, a mortgage... We often chuckle and ask, "Why are they fighting about that?!? Why did we ever fight about that?!?"

But, in reality, those things, however trivial, triggered hurt feelings in us, too, a long time ago. And dealing with the significant feelings the situations brought up helped us move on and grow closer and understand each other better for the next time we faced a challenge that was a little tougher.

We found another note, written during a training conference we attended together. We always had to find a way to communicate while we were listening to some sort of presentation. If this were happening today, I guess we'd just text each other on our cell phones or something, but we were doing all this back in the dark ages, you know. I laughed so hard when I read how sensitive I used to be anytime I felt he had wronged me or anytime I thought he might be displeased with me in any way. I could hardly believe we got into such a heated exchange over Dwayne's tone of voice at lunch! The idea seems so absurd to me now. When he gets an attitude with me these days, I don't take it personally at all. I usually just consider what stress he is under or already know what is going on in his head and so, I hardly even notice. Double click to enlarge the image below so you can read our exchange even better. You will be able to tell what I wrote because my handwriting is the neater of the two. At the bottom, I even drew lines that he filled in answers to. And, when I didn't like his answers, I wrote mine instead. 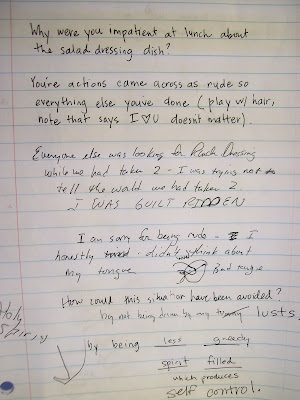 After we finished laughing over this one, I told him I was glad that even though we had grown so much, we had done so together. The unity and understanding and intimacy we have now has been maintained and built up through lots of interchanges like the one above, where we both got to be totally honest and vulnerable and where someone (or both of us) admitted that they were wrong (even over something as insignificant as the tone of his voice at lunch). God love Dwayne for putting up with me. And, God give him his reward in heaven for striving so well to live with and truly understand this weaker vessel he married.
Family