Skip to main content
Posted by Veronica Boulden on December 02, 2009 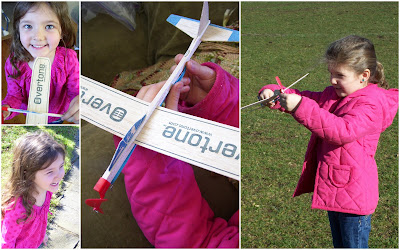 Dwayne picked up a toy airplane at a trade show in NYC a few weeks ago. He didn't go to the trade show for it, just got it while he was there, you see. Anyway, he put it together and took Norah outside in the yard to play with it this last weekend. They came back less than five minutes later with Norah in tears. The plane had landed on the neighbor's roof. After knocking on her door and receiving the nice old lady's permission, Dwayne climbed up on her roof using one of his ladders to get it down. It was quite a sight to see him carrying a full sized ladder down the road, Norah trailing behind him, wiping her eyes but smiling again. After that, the two of them took the quick trip to the neighborhood park where they could fly it in the empty ball fields. That went much better.