Skip to main content
Posted by Veronica Boulden on December 14, 2009 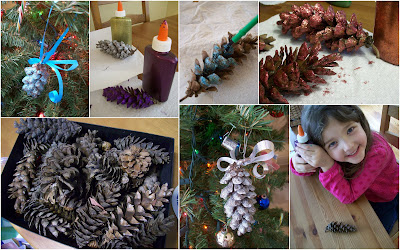 Norah had so many pine cones in her nature collection, I suggested we make a wreath. When I showed her the picture that I was basing my idea on, she got hysterical. She thought that was a terrible idea, since the pine cones would still be "ugly and brown" and through tears, suggested we do something, anything involving that dreaded word, "Glitter!" I thought this was a terrible idea, but went along with it anyway, for the sake of compromise. She obviously does not see the inherent beauty and design in simple, natural, brown pine cones. But, she is only five.

We used some glitter paint that I've had since ages ago. I think my sister gave it to me back when I was still teaching school, so like I said... ages ago. The colors weren't seasonal, but they were perfect in Norah's eyes. "Princess pink!" and "Ariel blue!" The only one I liked, the silver, she called "Boring." But, Norah had fun and they turned out all right. We tied some ribbon onto the stems and made them into Christmas ornaments.

We still have enough pine cones to cover a wreath, but I don't see it happening. Allowing a strong minded child the dignity of doing what she wants to with her own stuff is simply painful sometimes. A wreath would be so pretty... but, oh well, maybe next year.
Homeschool