Skip to main content
Posted by Veronica Boulden on November 28, 2010
I plopped down on Norah's bed the other day. I just had to rest for a second. I was out of breath because I had been cleaning at a frantic pace for about twenty minutes straight. That's when I saw her easel, I mean really saw it. We've had it for at least a few years and that was the first time I had even noticed it since I can't say when. 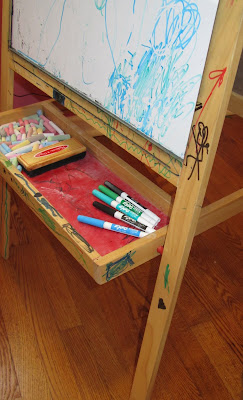 When I brought this easel home from the store, I know I made a silent promise to myself that it wouldn't end up looking like this, like every other easel I had ever seen at someone's house, in the church nursery or at various garage sales. I thought I would train my kids to draw on the designated sections only. But, here it is years later and as you can see, things haven't gone as I planned.

Turns out, I have been too busy training Norah how to write her letters A to Z to train her not to draw on the easel legs. And, I've been too busy cleaning apple cores out of this chalk tray to ever actually clean up the chalk dust underneath the chalk.

These days, I figure if I can teach the girls to keep the chalk off the walls and the lids on the dry erase markers, I've done well. The words, "Pick your battles" come to mind. Older moms with teenagers would say those words in my presence when I didn't have kids and I just thought they were making excuses for their lack of parental zeal. But, now that I have kids, I get what they were trying to tell me (and what they were saying to themselves to comfort their own doubts). 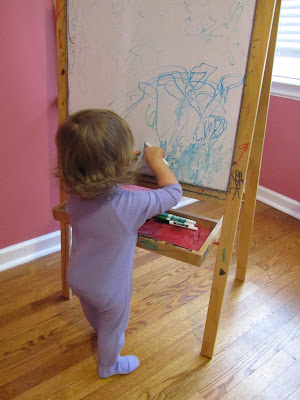 Parenthood is much harder than I ever imagined it would be and I can't do it all, so I have to focus on what's most important. And, I suppose a lot of moms have come to the same conclusion I have, thus, every easel I've ever seen looks like ours.
Family