Skip to main content
Posted by Veronica Boulden on November 29, 2010 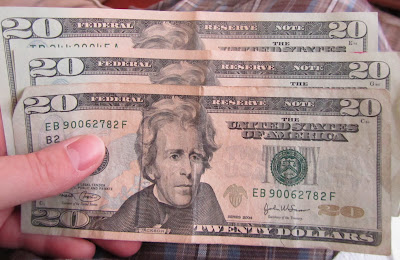 I was really annoyed at Dwayne the other day. He was cleaning off the bookshelf instead of doing ten other things I thought he should be doing at the moment. I confess, I should have been thankful that he wasn't just sitting on his butt, drinking a beer, watching the game, but that's not the point. My heart was in a really bad place at the time.

I was stressed because I felt like I needed his help changing the baby's stinky diaper, tending to the hot pots on the stove, getting the dish washer loaded and started, switching the laundry, getting ourselves and the kids ready for where we were going later that day, packing the diaper bag... I was thinking about all that needed to be done and trying to handle the more pressing issues on my own, while he was making yet another mess by taking things off the shelves in order to reorganize them.

I mumbled a thing or two at Dwayne about his bad timing. He didn't notice. I yelled. He ignored me (or didn't even hear me over the music). That made me even more cranky. So, I kicked a basket of toys. I just knew in my heart I was right about what Dwayne should be doing, so then I got prideful. I sat down in a huff on the couch and scowled. I was sitting down because I had remembered that I also needed to send an email before we left for the day.

While all this was happening, Dwayne is entirely oblivious to or at least, mostly oblivious to what I was going through. He was just cleaning off the shelves. I started writing that email I needed to write and a few minutes later, Dwayne walked into the room I was in. He was holding up $60 that he'd found hidden under a book on the shelf while he was rearranging some books. He said, "You can have this." and he put the money in my hand. I took the money and all sorts of thoughts and emotions were going through my head, but these Bible verses came to my mind as Dwayne went back to work on the shelf.

"Do not make light of the Lord’s discipline, and do not lose heart when he rebukes you, because the Lord disciplines the one he loves, and he chastens everyone he accepts as his son." Hebrews 12:5-6

They seemed to be totally out of place in the moment and they seemed to come "out of nowhere," but, thinking about it further, I believe the Holy Spirit brought those verses to my mind as a way of telling me what God was doing at the moment. I was being prideful and angry that morning and that was my own problem, not Dwayne's fault for being "insensitive" to what I wanted help with. God allowed my loving husband to present me with $60 at just the right moment, to prove a vivid point to me and to show me the error of my ways. I can't think of a more gentle yet effective "rebuke" than this $60 (that I really needed) that wouldn't have been found if Dwayne hadn't been cleaning off the shelf in the first place!

God will not abide our pride and anger and I am thankful He won't. He won't allow us to continue in sin without trying to humble us (even if it's just a sinful state of mind.) It's uncomfortable at times, but I am grateful for God's discipline to me. It's not that God doesn't love us when He does this kind of thing, when He humbles us and makes us come face to face with how wrong we are. God loves me so... I had to humble myself and admit how wrong I was wrong and receive $60 from Dwayne that morning. God loves me so... He creates effective rebukes for me when I need them.

"The Lord disciplines the one He loves."
Spiritual