Skip to main content
Posted by Veronica Boulden on December 24, 2010
For those of you interested in this kind of thing, this is a picture of Norah's most recent math test. 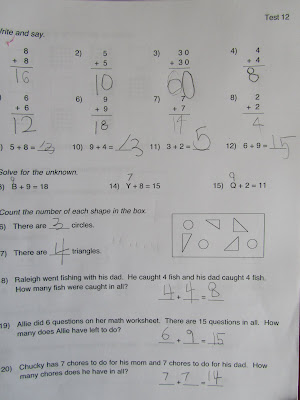 You may notice that there are no marks on this paper. (That's mainly because Norah didn't get anything wrong.) But, even if she had gotten something wrong, I probably wouldn't have marked her paper. I probably would have just made her go back and erase the problem she missed and do it over.

I have been surprised to find that grades are almost entirely meaningless in this world of home school. I mean, really, why would we mark a problem wrong and just leave it wrong when she has the time to go back and fix it?

I've discovered that there is no reason for Norah's tests to be graded, at least, not "graded" in the traditional sense. Grades exist in school as a way for teachers to communicate with parents and students that they don't have enough time to talk to about how well students are mastering the course material.

But, since I am the parent and the teacher, I don't really need to communicate with myself by grading Norah. Tests serve, more than anything, to confirm to me that what I thought about Norah is true. She "get's it" and we can move on to the next level.

And, since "learning" in a home school environment is just Norah confronting the material she has been given to master, she doesn't need a grade to know whether or not she "gets it." There's no way for her to "fake it," even to herself. There's nothing, including the kid who sits in front of her, for her to "hide behind." There's no motivation to cheat or mislead me as to how well she is really doing. She never has the option of just going through the motions. She just learns what it is she needs to learn next, takes as much time as she needs to learn it (even if extra time is added due to a lack of diligence and interest on her part). But, only once she's mastered something, then she moves on.