Skip to main content
Posted by Veronica Boulden on December 09, 2010 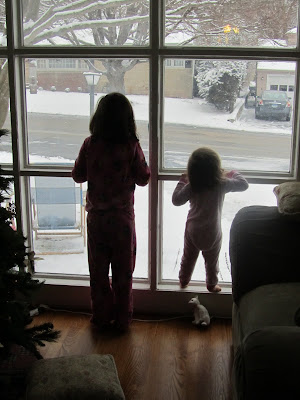 The girls watched the snow fall for several minutes one morning this week. It was a sweet, peaceful scene, so I snapped a photo of them. Only now do I realize this photo communicates so much about why so many parents, including me, choose to home school their children.

How many kids do you think have the time or even the freedom to sit and be inspired by a snow fall? My oldest daughter was not only free to watch it snow that day, she was later free to bundle up in her snow suit and go play in it until she was so cold and content that she just had to come inside... until she was warm and rested enough to go back outside and play again.

I believe snow falls are an inherent right of childhood, but most kids grow up without most of them, as a rule. I kept track last winter, not realizing I would ever have opportunity to share what I noticed. But, I remember only one day on the weekend last year with falling snow during the daylight hours and only three days on a weekend with enough fresh, thick snow for kids to play in with any real zeal. Thus, we home school.

It's not just so that our six year old can read all the books she wants, but so that she will have access to the simple glories creation intended for her to see, touch, taste and feel until her heart is absolutely full of wonder and inspiration because of them.
Homeschool