Posted by Veronica Boulden on April 21, 2014
"Our model is Jesus, not only of Calvary, but of the workshop, the roads, the crowds, the clamorous demands and surly oppositions, the lack of all peace and privacy, the interruptions.  For this, so strangely unlike anything we can attribute to the Divine life in itself, is apparently not only like, but is, the Divine life operating under human conditions."

One would think that a great theologian, celebrated writer, and beloved speaker would have no time to fetch an old lady her hot tea or blankets or favorite periodicals. But, one of the most surprising facts about C.S. Lewis's every day life was that he did devote a large portion of his time, emotional energy, private life, and actual physical strength to caring for the common, mundane, even menial needs of an elderly woman. Her name was Mrs. Moore and she was the mother of Lewis's friend, Paddy, who had died in WWI.

Lewis or Jack, as he was called, and Paddy become very close friends while they were soldiers and vowed to care for one another's family if anything happened to the other in wartime. Paddy did, in fact, die, and from then on, Lewis, true to his word, took Paddy's mother into his affections as if she were his own.  Mrs. Moorse was kind to Lewis, like a second mother, and her daughter, Maurine, Paddy's younger sister, was like Jack's sister. Lewis and Mrs. Moore and Maurine all had mutual affection, it's clear. But it's also clear from his letters and the letters of people close to Lewis who witnessed his private life, that age and infirmity made Mrs. Moore selfish and quite insensitive and her behavior tested even the most resolute and virtuous characters around her.  No matter how close his publishing deadlines happened to be, no matter how much prestige or success he had in his career, no matter how much of a real difference his work was clearly making in all of Christendom, Mrs. Moore expected Jack to do the simplest things to the strictest standards and he did, all to please and honor her.

I was so inspired by Lewis's words at the beginning of this post, but at first, I didn't think of his life with Mrs. Moore, though it must have been the catalyst for what he said about the connection between interruption and "the divine life operating under human conditions." When I read the words, I first thought of motherhood because I am constantly interrupted by my kids. When I am not engaging with them, I try and fill up every bit of spare time with significant work, reading, worship, prayer, study, hobbies, preparations, so many things. I am hardly ever just sitting there, dotting on my children, anticipating their needs, so they have to interrupt me because I am almost always, in fact, busy.

They need a snack, another snack, another.  I swear they're hobbits.  They see a bug. Of course there are bugs, it's summer. They fall. They want sympathy and a band-aide, a Dora the Explorer band-aide, that purple one, please. Of course, when I am thinking rationally, I don't resent my children for interrupting me.  But it has been quite helpful to read and reread the quote above and to be reminded that interruptions and perturbations and the like are, in fact, "the Divine life operating under human conditions." Lewis saw it that way way as he stopped writing about Aslan, left Narnia, and went upstairs to serve Mrs. Moore.  I see it that way more and more often now. If my children lead me away from one of Lewis' classics to a hug or kind word or a significant discussion, I realize it's those types of things that will make up the bulk of my ministry to my children.

Life was like that for Jesus, too.  We know from his biographies, the Gospels, that Jesus was constantly interrupted. Some of His most significant works started as interruptions. A man breaks through the crowd, falls at Jesus' feet, and begs him to come, heal his daughter, quick, before she dies. Jesus stops going the way he was headed and heads toward the man's house, of course, immediately.  But, the crowd is pressing on him and He can't make good time and if that weren't bad enough, he stops dead in His tracks because someone has touched Him, healing power has gone out from Him. He must find out who was healed.  A woman in the crowd is compelled to come forward now, realizing she can't remain anonymous.  Jesus is waiting for her to explain herself, kindly, but persistently waiting.  So she admits in front of everyone that she has an issue of blood for years, has suffered many things under the hands of many doctors, has spent all she has to be healed and just wanted to touch his clock, believing if she did, she'd be healed. And she was healed!

I imagine this was a significantly long encounter.  It would not have been easy or quick to explain such details to strangers. She needed time and Jesus took the time she needed.  In fact, it took so long that by the time Jesus blessed the woman and let her go away in peace, a messenger had arrived from the man's house with the news, "Your daughter is dead. Don't bother the teacher anymore."  Jesus tells the man not be afraid and he goes on to his house anyway. The woman's interruption, the delay she caused, ended up showing God's glory even better. Instead of merely healing his daughter on her death bed, which would have been impressive enough, Jesus shows His total power and authority over life and death and this world and the realms beyond it even more clearly by bringing the girl back from the dead.

Thousands of years later we have this tremendous record displaying Jesus' glory that inspires us to worship Him and love Him and it is all because of how gloriously He handled His precious, perfect life's interruptions.   As a mom, as a Christian, as a Christian mom, I know I am also leading a "Divine life under human conditions" of my very own. Every single interruption in my life really could be that significant if I handle them right.  We love C.S. Lewis and we celebrate his works. But truly, when God tells him, "Well done, good and faithful servant." it may not be in reference to his books. It may be for how well he honored Mrs. Moore.

I want to remember that interruptions are nothing short of divine opportunities.  And, as if to illustrate the point, the back door just squeaked opened and the girls are running in bare foot from the yard, breathless and quite filthy. They have something to tell me.  But I asked them to wait a second, so I could get their photo. They barely waited. 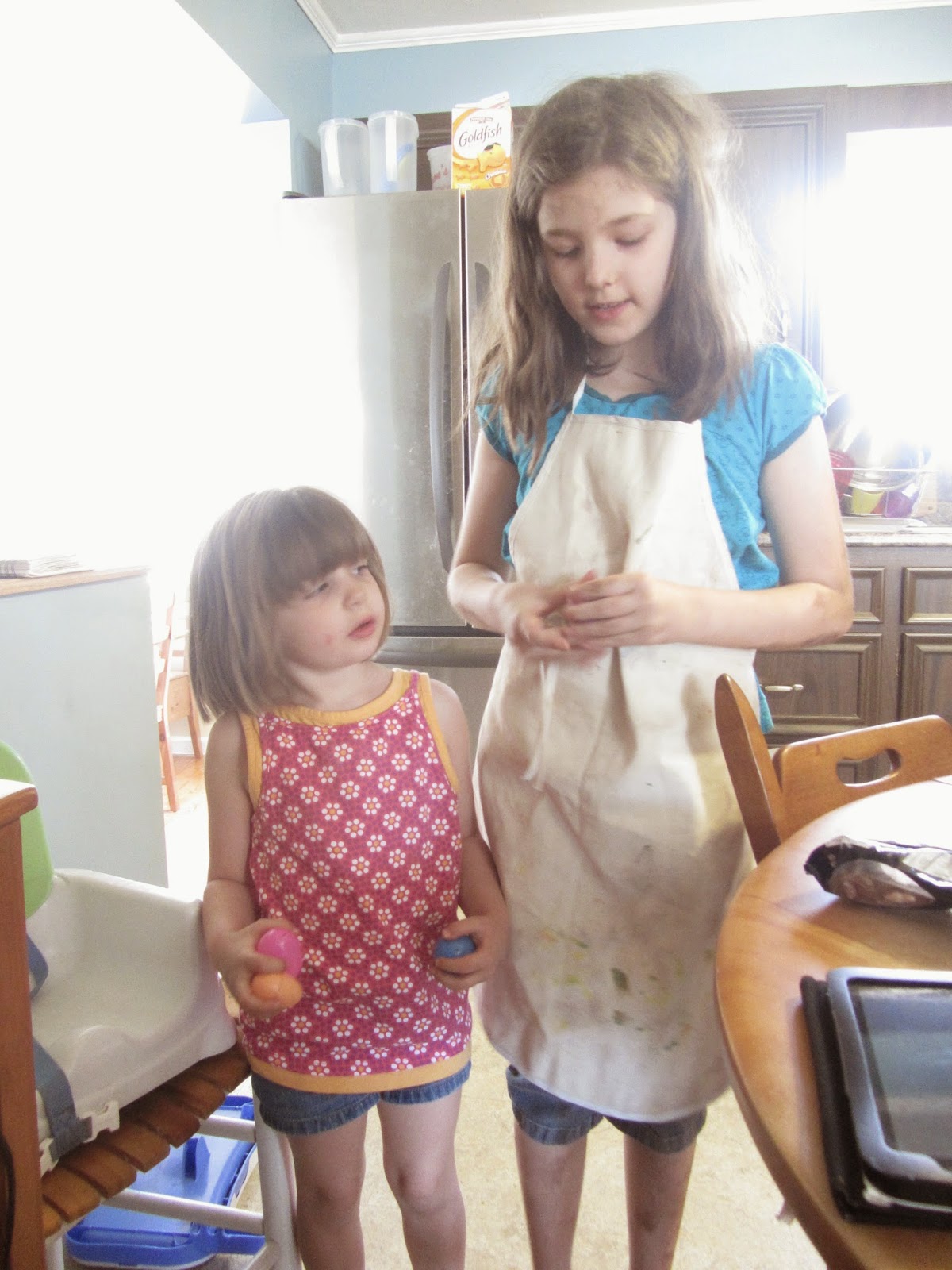