Nature as a Governess 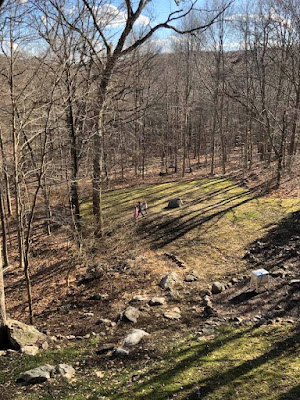 As much good as I have planned for my daughters inside, if the weather is nice, I let them play outside. And even when the weather is not so nice, when it's cold but also dry, I will let them go out if they ask to go out. It isn't just the spring and summer and autumn world that is glorious. The winter world is full of wonders, too.  And winter must teach them something of hope. They see that the same tree that looked so dead comes back to life and even blooms and bares fruit in another season.

It's a priority for us to have leisure time for simply being outside, so I haven't over-scheduled our lives. We have piano lessons and co-op in our week.  If we had other places to be all the time, we'd need to be inside doing schoolwork so we could "get it done" before we had to go, go, go. So we have learned from experience and we are making the conscious choice to limit enrichment extracurriculars for this instead, the ability to simply play outside as an enrichment activity. (And being home also allows us to be around the dinner table together most evenings instead of at the sports field or gym or in the car.)

We live in the woods now, and so we have a lot of property to explore. We don't really have to go anywhere to be in nature. Actually, if we walk far enough into our woods, we can meet up with a hiking trail and we can go even farther.  But before this house, we had a small yard in an orderly neighborhood. But we made the most of that, too. We had a vegetable garden, flower beds, a fire pit, a sandbox, and a water hose.  We also took daily walks to the park nearby and more frequent drives to other parks where we could hike, etc.

Living and experiencing the actual, physical, natural world is such a priority to us that we also tend to go to the pond or the beach rather than the pool, though I love the pool.  We also choose to hike rather than go to indoor trampoline parks or amusements. And our love of nature is also the reason I look back at most of our vacations and see that we most often chose to simply visit family and do activities that put us outside at the beach, or the inlet, or the state parks, national parks, nature preserves, canyons, rivers... We have deeper relationships with the people we love and such magical memories of God's world from doing this.

My kids are like other kids (and like their parents) and they will complain about the bugs or the sun or the heat (or all three.) They have been bitten or scraped their knees or have gotten water up their noses or gotten sunburns even with sunblock.  But being in nature in spite of those things enough times, they have learned over and over again that there's always a reward. They know from experience that nature never skimps on her end of the bargain.  Nature will make your legs and lungs burn as you hike up that trail and you will have a few bug bites when you get back to the car, but the view from the top of the waterfall and the sound of the water rushing over the rocks and the smell of the lush green all around and the feel of the moisture in the air on your sweaty skin... Ah, so worth it! You always forget about the bug bite.  The memory of the waterfall never fades. It comes back to you time and time again and stirs up a longing for more goodness and beauty like it.

My kids have also grown hearty from enduring nature's harshness. They can hold their tongues and endure physical discomfort and push their bodies, all things I don't know how I would have managed to teach them otherwise. So now, the complaining happens less and less frequently, actually. They go into nature with a sense of nervous, excited expectation now.  They know something always happens.  A few minutes after they may complain about one bug, they will cry out in awe over another bug or a bird or the beauty in the sky around them. They will open their eyes wide and shout, "Look!" And they will drink all in with all their senses.  Or they will close their eyes and just sigh contently.  These experiences are shaping their souls.

Once, my kids swam in a river in Zion National Park. It was totally spontaneous. The heat was so oppressive that day, it is not surprising they did so.  The rocks at Zion are magnificent; they truly "cry out," so being in their presence was totally worth the physical discomforts we experienced that day. We all recall and agree to that truth heartily.  After hours at the park, my kids pulled off their hot sneakers and socks and ventured to put their bare-skinned toes into the water, and I just knew what would happen next. They have a whole body and it was hot and the water was cool and they were made to fit in to God's world, so I didn't scold them when they just kept right on waking into the river and cooling themselves off.  I was afraid for a moment and urged caution, but I said a quiet prayer and then just let them be in God's world.  There, they swam in a cool, sparkling blue-green river with the warmest air all around and the most massive red and white rocks towering over them, so massive they were blocking out most of the sky except for what was directly above, their laughter echoing off every surface and coming back to them.  It's like the rocks were sharing their delight. They still talk about that experience.  They knew something of Eden that day and they've had countless glimpses of Eden in their own backyard.

So when we come inside from being outside so much and I teach them about being, creation,   or stewardship, it's easier to do so now that they been out in nature.  I'm not telling them something new.  I am reviewing what they already know.  When I tell them the world was made by a good and loving God, they nod. When I tell them they were made by a good and loving God for the world, they also know it. I say everything is a gift for them to receive in godly fear and use with virtue. They say, "Yes." and "Amen." I tell them the world is also fallen and there is risk and death involved with life here now, they know this already, because they have scarped their knee and been burned by the sun.  The truths of Scripture do not sound like a fairy tales to them, because they have been in the real world and they read often from God's epistle of nature.  They've been so long outside, and never lived overly much in any artificial world, so the greater things are not unbelievable.

Outside, they have already learned lessons on stewardship for themselves. When they were gathering shells, they discovered one had a tiny hermit crab inside. They gave glory to God over the marvelous creature. (They can't help this. The glory just comes up and out of their mouths, as if that's what mouths are for.) The crab was so tiny compared to them, so helpless when pulled from his habitat, but also so powerfully equipped for the place he was designed for.  "Look at his claw! Look at how he tucks himself into his shell!"  They show each other and marvel at his unique beauty.

But they also put him right back in the tide pool without needing to be told that is what ought to be done, because they can just sense it.  They know already that this whole world is theirs to keep, and they can take empty shells, but that that crab owns his shell and he is not theirs.  He had a form and place and a purpose and He belonged there.  More importantly, if he, being so little, has a form, and a place, and purpose, so must they... I can tell these are the questions that nature asks them.

Nature is a marvelous, diligent, beautiful governess, but sometimes she can be harsh. It is at those times when I have to trust her. I have come to understand that nature is far better trained than I am to teach my daughters about the greater things.  Best of all, her lessons usually only require our time (or perhaps a minimal parking fee). So we give nature time and she gives us back so much more.
Homeschool Nature