Scars Can Come in Handy 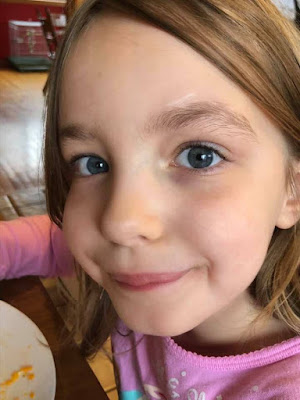 A magical thing happened yesterday. I was eating scrambled eggs with Adele and I noticed her beautiful scar above her eye. It really almost glowed in the morning light. I gently touched it and told her it was beautiful, before I even really thought about what I was saying. (Our usual impulse is not to mention it, since it sometimes causes everyone pain or embarrassment to mention it.) She scrunched her face, but her eyes were also dancing and hopeful. She asked, “How is my scar beautiful?” That was a challenging question. How? I remember resenting the fact that God let her face be marred. So even my own heart was still tender about it. But I told her what came to me at that moment, “It’s a story... about you and your sisters. You were playing, having so much fun. Do you remember? Your sisters were spinning you.” Even before I finished saying that, Avril was walking in to the kitchen with her head in a book asking, “Mom! What’s an underground? Listen to this passage. Dumbledore says, ‘Scars can come in handy. I have one myself above my left knee that is a perfect map of the London underground.’” Adele and I gasped. We couldn’t believe the timing. Avril had no idea we were talking about Adele’s scar. Norah came in, naturally. We discussed the timing, the story, the scar on Dumbledore, the one on Harry, and we talked about the one on Adele’s face, too. This brought up lingering guilt about what happened, apparently. The sisters had been spinning her. “It was stupid of us.” We discussed the influence they get to have on each other as sisters and we all agreed that even with the risks, it’s a really good thing to be a sister. And will you believe it? They laughed and Norah picked Adele up and spun her around the kitchen before I stopped it and shooed them off to chores. They ran away laughing. It all happened so naturally. It was only later that I fully recognized the magic we had been under. That might have been the first time Adele had been spun by a sister since she had been hurt. God was at at work here, allowing the girls to confess lingering guilt and be truly reconciled and set free, healing the scars (seen and unseen) left from their mistakes, redeeming it all, making it all beautiful, as He always does.
Spiritual